Jennifer Aniston and Justin Theroux gamely gushed about their love for one another in one interview after the next during their marriage. But behind the scenes, it was a different story.

“Jen knew Justin wasn’t happy and gave him as much space as he needed,” a source says in the new issue of Us Weekly. For a time, her strategy seemed to work. “But it became clear they weren’t meant to be married,” says the source.

Secure in their love, Aniston, 49, encouraged Theroux to embrace his love of New York City, telling him to “spend as much time as he wanted in the city,” says the insider — and the Leftovers alum did just that. For much of their marriage, Theroux lived in the bachelor pad he never sold in downtown Manhattan.

The Friends alum found the alone time beneficial. “She’s happy to be at home with her routine, doing her yoga, eating healthy meals and getting a facial or massage,” says the insider. “At heart, she’s a California girl. NYC just wasn’t ever going to be home for Jen.” Her husband’s hobbies weren’t for her either: “She doesn’t want to get on the back of a motorcycle or go to a tattoo shop,” notes the insider.

While the distance was fine for Aniston, absence did not make Theroux’s heart grow fonder. Notes the insider: “He found he was just happier living on his own in New York without her.”

When he was in her Hollywood circles, the 46-year-old often felt out of his element. By the end, “even when Justin was in L.A. staying with Jen,” recounts the insider, “he would spend most of the time in the guest house” behind the Bel Air mansion. There, the writer “would play music and hang out,” says the insider. In the final months of the marriage, Theroux even slept in that bungalow: “He just felt more comfortable there than in the main house with Jen.”

Aniston and Theroux even tried marriage counseling. “They had been in couples counseling long before they married,” a source previously told Us. “They tried to work through issues relating to their very different lifestyles, communication and, of course, the New York City vs. Los Angeles living arrangement.” 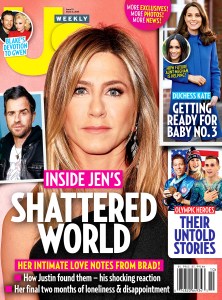 In the end, it didn’t work. Aniston and Theroux announced on Thursday, February 15, that they came to a mutual decision at the end of 2017 to split after two years of marriage. “We are two best friends who have decided to part ways as a couple, but look forward to continuing our cherished friendship,” they said in a joint statement to Us, adding that they “are determined to maintain the deep respect and love that we have for one another.”

For more on Aniston and Theroux’s split, pick up the new issue of Us Weekly, on stands now!