Kanye West Is 'Refusing' to 'Move Back' to Los Angeles Amid Marriage Drama
Most Shocking Reality TV Moments of the Week!
Fun in the Sun! Jennifer Garner Enjoys Beach Day With Her Kids After Flaunting Bikini Body
END_OF_DOCUMENT_TOKEN_TO_BE_REPLACED

“Justin Bieber recently followed Selena on Instagram,” one Jelena believer tweeted on Sunday. A second added: “Waiting for Selena to log on to Instagram and follow Justin back but knowing [her] she probably won’t …”

Back in March, fans went just as nuts when Bieber posted a throwback photo of the two kissing in happier times. According to reports, Gomez saw the photo and wrote “Perfect” in the comments section of the post. Days later, Gomez was spotted at Bieber’s concert at L.A.’s Staples Center on March 23. 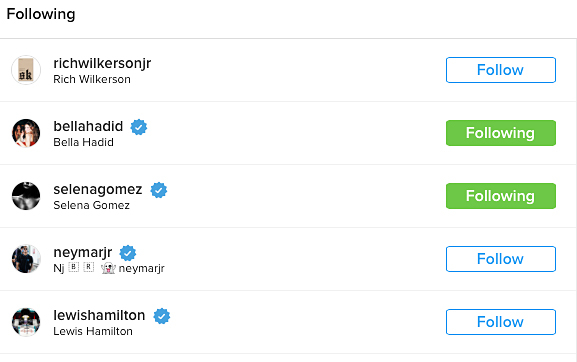 PHOTOS: Justin Bieber and Selena Gomez: The Way They Were

Bieber, 22, and Gomez, 23, famously dated on and off from 2011 to 2014. Bieber opened up about their tumultuous relationship in an interview with Billboard the following year. “I’m proud of the woman she is today,” he said in November 2015. “When you love someone that much, even if something comes between you, it’s a love that never really dies.”

The “Sorry” singer and Gomez have both moved on since their breakup. Over the past few months, Bieber has been linked to Kourtney Kardashian and Hailey Baldwin. For her part, Gomez romanced One Direction’s Niall Horan, DJ Zedd and NYU graduate Samuel Krost. Us Weekly exclusively revealed in March that Gomez was hooking up with singer Charlie Puth.

we all now that Justin and Selena are just pr now, move on ?

Just be happy for Justin and Selena

When you thinking Justin and Selena are dating low key. #jelena2016

can justin and selena hang out again pls

Wait what happened with Justin and Selena

Kanye West Is 'Refusing' to 'Move Back' to Los Angeles Amid Marriage Drama
Most Shocking Reality TV Moments of the Week!
Fun in the Sun! Jennifer Garner Enjoys Beach Day With Her Kids After Flaunting Bikini Body
END_OF_DOCUMENT_TOKEN_TO_BE_REPLACED