This One-Piece Swimsuit Is So Flattering, You’ll Never Want to Take it Off
Jennifer Lopez’s 4th of July Swimsuit Style Can Be Yours For Under $30
These Denim Shorts From Amazon Are a Hit for All Body Types
END_OF_DOCUMENT_TOKEN_TO_BE_REPLACED

Back to reality. Khloé Kardashian and Tristan Thompson have finally returned to L.A. two months after welcoming their daughter, True, in Cleveland.

The Kardashian-Jenner clan shared multiple Snapchats of her June 17 welcome-back party, and a source reveals in the new issue of Us Weekly that’s hardly the whole picture. “They’re so happy to have her home,” the pal says.

They’re more cautious, however, of her basketball player beau, 27, who infamously cheated on her while she was pregnant. But the duo are still working out their problems. “Tristan is a part of Khloe’s life,” the insider says. “They are together, so he will be there. They’re continuing to work on their relationship.”

And at the end of the day, “they know that in order to have Khloe back in their lives, they have to accept him,” adds the source. But still, “they’ll support Khloé in whatever she chooses.”

Sources previously told Us that the Good American designer, 33, forgave the NBA player and took him back. But through the ups and down, their baby girl has been the new mom’s No. 1 concern.

Khloe Kardashian and Tristan Thompson Cheating Scandal: Everything We Know So Far

Meanwhile, Us also broke the news that Keeping Up With the Kardashians will address Thompson’s cheating scandal in their upcoming 15th season. “They always discuss real life things on the show. They’ve never ignored a topic,” a source close to Kardashian notes. “It will definitely be brought up, but they don’t know how much. They can film hours about it, but in the end, Khloé is one of the executive producers and will have final say on what actually makes air.”

And though the controversy will be addressed, Thompson himself won’t be appearing on KUWTK. “Khloé could actually care less about whether or not he does,” a source told Us early in June. “She is focused on trying to rebuild the trust in the relationship.” 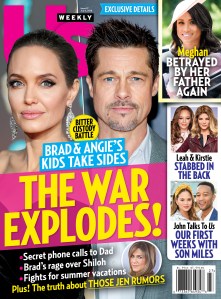 For more on Kardashian and Thompson, pick up the new issue of Us Weekly, on stands now.

This One-Piece Swimsuit Is So Flattering, You’ll Never Want to Take it Off
Jennifer Lopez’s 4th of July Swimsuit Style Can Be Yours For Under $30
These Denim Shorts From Amazon Are a Hit for All Body Types
END_OF_DOCUMENT_TOKEN_TO_BE_REPLACED