Kanye West Is 'Refusing' to 'Move Back' to Los Angeles Amid Marriage Drama
Most Shocking Reality TV Moments of the Week!
Fun in the Sun! Jennifer Garner Enjoys Beach Day With Her Kids After Flaunting Bikini Body
END_OF_DOCUMENT_TOKEN_TO_BE_REPLACED

Kelly Ripa isn’t here for it! The LIVE With Kelly and Ryan cohost clapped back at trolls who suggested she’s had plastic surgery on a now-and-then Flashback Friday photo Ripa posted on Friday, August 17.

Stars Fight Back on Social Media

“And a new nose,” a commenter chimed in. “Bless ur heart honey baby poor thing.” 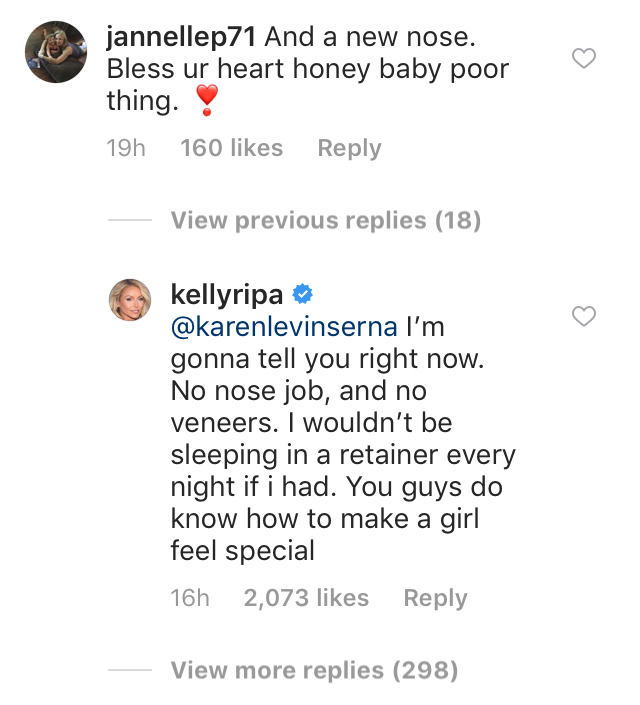 The actress was quick to shoot down the rumor, writing, “Same nose. Good side, bad side plus makeup.”

She later addressed a second follower who suggested she also got veneers, writing, “I’m gonna tell you right now. No nose job, and no veneers. I wouldn’t be sleeping in a retainer every night if I had. You guys do know how to make a girl feel special.” 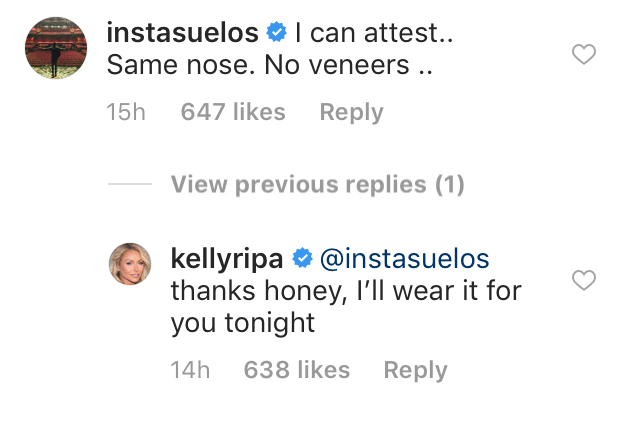 Ripa’s husband of 22 years, Mark Consuelos, came to her defense. “I can attest … Same nose. No veneers … and fierce retainer,” he wrote, to which his love replied, “Thanks honey, I’ll wear it for you tonight.”

The Riverdale actor, 47, did poke a little fun at his own dated ensemble, however, writing, “Belt, jeans, hiked up high … sweater tucked in??? Lord have mercy … and I know I looked in the mirror that night and said ‘yeah. You look awesome dude.’”

The Emmy-winning TV personality replied with a super sweet message, writing, “babe that was the style then. To look our absolute worst was all the rage (you were and are still the sexiest man I have ever seen.”

Ripa opened up about falling for her longtime love before she even met him in a new interview with SiriusXM’s Lunch With Bruce. “[All My Children casting director Judy Blye Wilson] showed me his picture and … at that point, I was not a hopeless romantic. I never thought about getting married, it never occurred to me that I would grow old with someone. I just thought I would be living my single girl life in the city,” she said. “I had no responsibilities and I was earning a good living on the soap opera. When I saw him, the photograph of him, I saw my entire future with him flash before [my eyes]. Like. I saw it. I [didn’t] believe in any of that and now I do because of that moment.”

The twosome married in 1996. They share sons Michael, 22 (who is set to appear as a younger version of his father’s character, Hiram Lodge, in an upcoming episode of Riverdale), Joaquin, 15, and daughter Lola, 17.

Kanye West Is 'Refusing' to 'Move Back' to Los Angeles Amid Marriage Drama
Most Shocking Reality TV Moments of the Week!
Fun in the Sun! Jennifer Garner Enjoys Beach Day With Her Kids After Flaunting Bikini Body
END_OF_DOCUMENT_TOKEN_TO_BE_REPLACED