Sending well wishes. TV and radio personality Melyssa Ford is “lucky to be alive” after suffering major injuries in a devastating car crash in Los Angeles on Thursday, June 28. She is recovering in an L.A. hospital under “constant observation,” Us Weekly can confirm.

Ford “sustained serious head injuries including a skull fracture, concussion and bleeding in her brain amongst other severe cuts and bruises,” a rep for the 41-year-old video vixen told Us in a statement on Sunday, July 1. 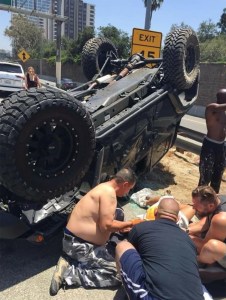 The former BET Style host was on her way to celebrate her close pal Zena Foster’s bridal shower. While traveling on L.A’s Ventura Freeway, “an 18-wheeler merged into her lane, clipping her back right tire as she exited Brand/Central Avenue,” her rep tells Us. “The violent impact sent her 2017 Jeep Wrangler Sahara Unlimited into a tailspin and the vehicle flipped three times before landing upside down.”

According to the spokesperson for Ford, “she was surrounded by EMT personnel, lying at the side of the freeway beside the crushed Jeep, covered in blood, when she regained consciousness.” 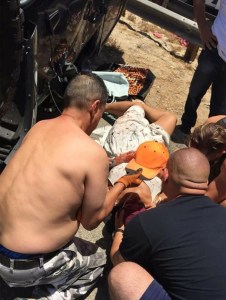 As for additional injuries, the Blood, Sweat & Heels alum’s rep tells Us that she “has a 10-inch open wound that had to be surgically closed using stitches and staples in addition to several large gashes on her arms and legs,” adding that “God and her seatbelt saved her life.”

Celebrities Who Got Their Start on Reality TV

In photos obtained exclusively by Us Weekly, medical professionals as well as several good Samaritans can be seen assisting Ford as she lies on the roadside next to her smashed vehicle.

Real Housewives of Atlanta star Claudia Jordan, a close pal of Ford’s, took to Instagram to share a photo and call on any eyewitnesses that may have seen the accident take place. “Melyssa doesn’t remember much so I’m hoping witnesses will come forward and assist in putting the pieces back together,” she wrote.

Ford’s mother, Barbara Ford, also spoke out about the accident in a statement to Us Weekly. “It’s so difficult in circumstances like these to live 2,500 miles away from my only daughter,” she told Us. “Melyssa is strong, always has been. We are going to get through this together.” 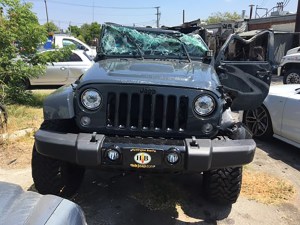 The driver of the 18-wheeler truck is still at large.