Free Samples! Have Top Health & Wellness Picks Shipped to You at No Cost
These Denim Joggers Are Our Secret to Cool, Casual Comfort
These Stunning Ruched One-Piece Swimsuits Show Just the Right Amount of Skin
END_OF_DOCUMENT_TOKEN_TO_BE_REPLACED

In his 1995 ballad, Michael Jackson lovingly crooned, “You are not alone.” But since his sudden 2009 death at age 50, his daughter, Paris, often struggled to believe his lyrics.

PHOTOS: Paris Jackson Through The Years in Pictures 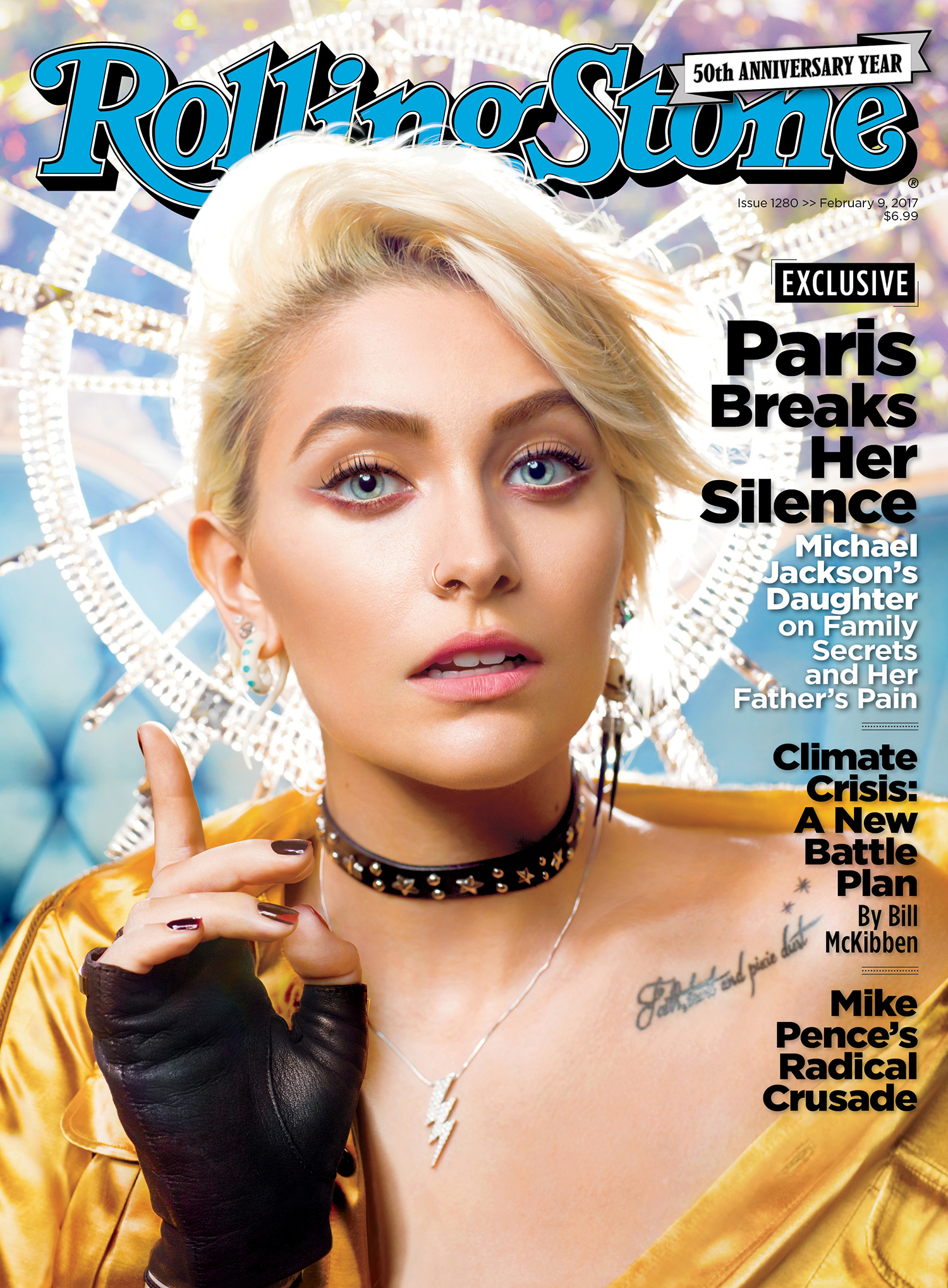 Now, in her first-ever in-depth interview, featured in the new issue of Rolling Stone, the late King of Pop’s only daughter, 18, opens up about learning to cope with depression, finding justice for her father and defending his legacy. Find out more in the video above, and detailed below.

“They always say, ‘Time heals,’” Paris, who dates 26-year-old drummer Michael Snoddy, tells the magazine. “But it really doesn’t. You just get used to it. I live life with the mentality of, ‘Ok, I lost the only thing that has ever been important to me.’ So going forward, anything bad that happens can’t be nearly as bad as what happened before. So I can handle it.”

PHOTOS: Most Shocking Celebrity Deaths of All Time

Here, Us Weekly rounds up the nine most-shocking revelations from her bombshell interview.

1. Growing up on the Neverland ranch was, well, awesome

After all, the 2,700-acre California estate featured an amusement park, zoo, movie theater and, most special to Paris, Michael Jackson.

“I just thought his name was Dad, Daddy,” she recalls, nearly clueless about his global fame during her seven years spent on the ranch. “We didn’t really know who he was. But he was our world. And we were his world.”

Though Michael offered Paris and her brothers, Prince Michael, now 19, and Blanket, now 14, the option to go to a typical school with other kids, the trio preferred being home-schooled. “When you’re at home, your dad, who you love more than anything, will occasionally come in, in the middle of class, and it’s like, ‘Cool, no more class for the day. We’re gonna go hang out with Dad,’” says the model. “We were like, ‘We don’t need friends. We’ve got you and Disney Channel!’”

But, alas, rules still existed at Michael’s fantasy ranch. “We couldn’t just go on the rides whenever we wanted to,” she tells the magazine. “We actually had a pretty normal life. Like, we had school every single day, and we had to be good. And if we were good, every other weekend or so, we could choose whether we were gonna go to the movie theater or see the animals or whatever. But if you were on bad behavior, then you wouldn’t get to go do all those things.”

Michael Jackson and His Kids

At 8, Paris concluded she was “in love with this female on the cover of a magazine,” she recalls to Rolling Stone without getting into more specifics.

Her dad barely batted an eyelash. “Instead of yelling at me, like most homophobic parents, he was making fun of me like, ‘Oh, you got yourself a girlfriend,’” Paris says.

Indeed, Michael prided himself on being blunt with his kids, says Paris: “His number-one focus for us, besides loving us, was education. And he wasn’t like, ‘Oh, yeah, mighty Columbus came to this land! He was like, ‘No. He f—ing slaughtered the natives.’”

In June 2013, Paris, then 15, slashed her wrists and downed 20 pills of Motrin, hoping to escape her overwhelming depression and drug addiction. “It was self-hatred,” she admits today, “low self-esteem, thinking that I couldn’t do anything right, not thinking I was worthy of living anymore.”

For years, she’d been cutting herself and shockingly managed to hide it from her family. Before 2013, she had already attempted suicide “multiple times,” she tells Us’ sister magazine. “It was just once that it became public.”

The self-loathing began after her father’s 2009 death. Home-schooled until then, she began attending a private school in seventh grade. Unfortunately, the legend’s daughter didn’t fit in and found herself hanging out with an older crowd. “I was doing a lot of things that 13-, 14-, 15-year-olds shouldn’t do,” she reveals. “I tried to grow up too fast, and I wasn’t really that kind of a person.”

And, once Paris discovered Twitter, cyberbullying also played a role. “This whole freedom-of-speech thing is great,” she says. “But I don’t think that our Founding Fathers predicted social media when they created all of these amendments and stuff.”

She has since cleaned up. After spending her sophomore year and half of her junior year in a therapeutic school in Utah, “I’m a completely different person,” she says. “I was crazy. I was actually crazy. I was going through a lot of, like, teen angst. And I was also dealing with my depression and my anxiety without any help.”

4. She was sexually assaulted

At just 14 years old, by a complete stranger, she claims. “I don’t wanna give too many details,” she reveals. “But it was not a good experience at all, and it was really hard for me. And, at the time, I didn’t tell anybody.”

Since the pop icon’s death, reports have surfaced that Michael was not the biological dad of his three children. Paris, whose mom is Debbie Rowe, forcefully denies this, asserting, “He is my father.”

“He will always be my father. He never wasn’t, and he never will not be,” she continues. “People that knew him really well say they see him in me, that it’s almost scary.”

And after this interview, she’ll never address the topic again.

“I consider myself black,” she says, adding that her African-American father “would look me in the eyes, and he’d point his finger at me, and he’d be like, ‘You’re black. Be proud of your roots.’ And I’d be like, ‘Ok, he’s my dad. Why would he lie to me?’ So, I just believe what he told me, ’cause, to my knowledge, he’s never lied to me.”

6. Still, she didn’t know she had a living mother until she was 10 years old

“When I was really, really young, my mom didn’t exist,” Paris recalls. Eventually, she realized a man can’t give birth and probed her dad for answers. “And he’s like, ‘Yeah.’ And I was like, ‘What’s her name?’ And he’s just like, ‘Debbie,’” she says. “And I was like, ‘Ok, well, I know the name.’”

After Michael died, she began researching Rowe —  a nurse Michael famously met through his dermatologist, Arnold Klein — online. They connected when Paris was 13 and then again after Paris received treatment in Utah. But she insists she never sought a maternal figure to guide her.

“I’ve had a lot of mother figures,” admits Paris, citing her grandmother and nannies, among others to the magazine. “But by the time my mom came into my life, it wasn’t a ‘mommy’ thing. It’s more of an adult relationship.”

7. She is adamant about her father’s innocence

At around 9 years old, she first became aware that not everyone saw her dad as the flawless superhero she did.

Plagued by accusations that he sexually molested children — he even settled out of court —  Michael “would cry to me at night,” Paris confides. But hearing her father’s grief wasn’t too much weight for the little girl to bear. “He did not bulls—t us,” she says. “You try to give kids the best childhood possible. But you also have to prepare them for the shitty world.”

Knowing Michael better than almost anyone else, she has never doubted his innocence. “Picture your parent crying to you about the world hating him for something he didn’t do,” she tells the magazine. “And for me, he was the only thing that mattered. To see my entire world in pain, I started to hate the world because of what they were doing to him. I’m like, ‘How can people be so mean?’”

“Nobody but my brothers and I experienced him reading A Light in the Attic to us at night before we went to bed,” she continues. “Nobody experienced him being a father to them. And if they didn’t, the entire perception of him would be completely changed forever.”

8. Michael was murdered, she insists

In the midst of prepping for his massive comeback This Is It tour, Michael was found unconscious in his bed on June 25, 2009. He was pronounced dead at the hospital later that day. Looking back, Paris remembers his “exhaustion” from rehearsals. “I’d tell him, ‘Let’s take a nap.’ Because he looked tired. We’d be in school, meaning downstairs in the living room, and we’d see dust falling from the ceiling and hear stomping sounds because he was rehearsing upstairs.”

She points a finger at Dr. Conrad Murray, who was convicted of involuntary manslaughter for her father’s death. (He provided Michael with propofol, the anesthetic drug that he became dependent on.)

Also to blame: AEG Live, the promoters behind the concert. “AEG Live does not treat their performers right,” she says. “They drain them dry and work them to death.” She fears for Justin Bieber, who also works with the brand. At one of the pop star’s shows, “he was tired, going through the motions,” she recalls. “I looked at my ticket, saw AEG Live, and I thought back to how my dad was exhausted all the time but couldn’t sleep.”

Ultimately, however, Paris says she’s “absolutely” convinced Michael was murdered. “He would drop hints about people being out to get him. And at some point he was like, ‘They’re gonna kill me one day,’” she says. “It sounds like a total conspiracy theory, and it sounds like bulls—t, but all real fans and everybody in the family knows it. It was a setup. It was  bulls—t.”

PHOTOS: Michael Jackson's Face: How It Changed Over the Years

She’ll get justice — one day. “It’s a chess game,” she muses. “And I am trying to play the chess game the right way. And that’s all I can say about that right now.”

Nine of which are devoted to Michael. The 13-time Grammy winner often saw himself as Peter Pan (thus Neverland!) and called his only daughter Tinker Bell. In his honor, she has Faith, Trust and Pixie Dust inked near her clavicle. On her inner left wrist, she has Queen of My Heart in her dad’s handwriting, taken from a letter he once wrote her.

“He’s brought me nothing but joy,” she says. “So why not have constant reminders of joy?”

For more on Paris, pick up the latest issue of Rolling Stone, on newsstands now.

Free Samples! Have Top Health & Wellness Picks Shipped to You at No Cost
These Denim Joggers Are Our Secret to Cool, Casual Comfort
These Stunning Ruched One-Piece Swimsuits Show Just the Right Amount of Skin
END_OF_DOCUMENT_TOKEN_TO_BE_REPLACED