Doing it for him. Prior to Luke Perry’s untimely death, Shannen Doherty was not planning to participate in the highly anticipated quasi-revival of their hit show, Beverly Hills, 90210. But now she’s reconsidering it, a source exclusively reveals in the new issue of Us Weekly.

“Luke was Shannen’s favorite in the cast,” says an old friend of the actress. “She may participate now if they somehow pay homage to him.”

Luke Perry Through the Years: From ‘Beverly Hills, 90210’ to ‘Riverdale’

Tori Spelling first confirmed the news of the revival in February. “It is the OG crew back together, and we’re playing heightened versions of ourselves,” the Masked Singer star, 45, explained in an interview to Access Live. “The fans will be pleasantly surprised, though, because we will intercut that with scenes from the show. So it’ll be a whole ensemble cast.”

She also revealed at the time that because Perry was in the midst of filming Riverdale, “he will do as many [episodes] as he can do.”

A rep for Perry confirmed to Us Weekly on Monday, March 4, that the actor had died five days after suffering a massive stroke. He was 52 years old.

Since learning of the tragic news, the Girls Just Want to Have Fun star — who worked closely with the late actor on the ‘90s primetime teen soap as the Brenda Walsh to his Dylan McKay — has been seriously shaken. Adds the pal: “She just can’t believe he’s gone.”

The Heathers actress also broke her social media silence just one day later. “Yesterday morning I got a phone call that devastated me,” she wrote on Tuesday, March 5, via Instagram. “I’m struggling with this loss and am having a hard time with my thoughts. But, my heart goes out to his family and friends who were blessed by his light in their (and mine) lives.”

“Processing this is impossible right now,” she concluded the post, that included a recent selfie of her and the Riverdale star and three throwback images. 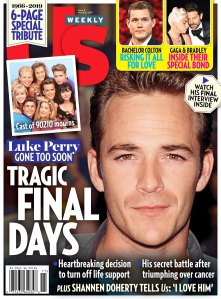 For more, pick up the latest issue of Us Weekly, on newsstands now.