Her time. YouTube sensation Ingrid Nilsen took a break from her usual rotation of fashion and beauty videos on Tuesday, June 9, to make an emotional announcement about her sexuality. Nilsen, 26, tweeted a link to the clip on Tuesday evening, writing simply, “New video. Something I want you to know…”

The gorgeous Internet personality opens the video with a deep breath, pushing her hair away from her face as she prepares to speak. She captioned the “Something I Want You To Know (Coming Out)” video, writing, “We all deserve our best chance.”

“Okay!” she begins as she throws her hands up. “I’m doing this. Alright, um, I guess I am just going to get right to it. Um, there’s something that I want you to know, and that something is, I’m gay!”

The beauty expert went on to explain her motivation for telling her nearly 4 million subscribers, saying she cares about her fans who have been with her for roughly six years and they deserve to know about this big part of her life. 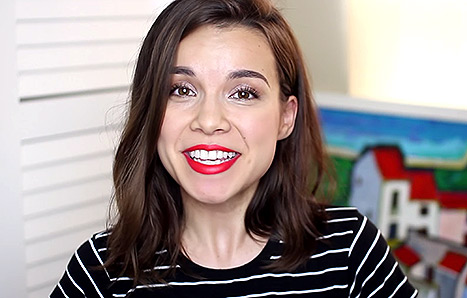 Nilsen spoke about being her “truest and purest self” at 4 years old when she was naturally attracted to girls and didn’t have the societal influences telling her that she shouldn’t be. She traced her evolution as a young woman and teenager, at a time when she attempted to suppress her true identity and dated guys.

PHOTOS: Out and Proud Celebs

“This is me,” she added. “Sitting right here, right now. This is me… the fact that I’m gay is a part of me… I have always been this way… I want to live my life unapologetically because I’m proud of who I am and I’m not gonna apologize for who I am anymore.”