Sarah Michelle Gellar Admits Her and Freddie Prinze Jr.’s Parenting ‘Expectations Are a Little Higher Than Most’
Shoppers Say This Is the Softest Cardigan You’ll Ever Own
La Adelita Tequila: The Hottest New Drink in Aspen
END_OF_DOCUMENT_TOKEN_TO_BE_REPLACED

This is unfoRettabale: Good Girls star and debut author Retta invited Us to tag along for a wild 24 hours!

5:20 a.m. Rise ’n Shine
In her NYC hotel room May 14, Retta wakes up to a blaring alarm. “I don’t mind mornings,” she says. “But not this early!” She quickly hops in the shower before her glam team arrives. Today’s look will be simple. “I just want to look pretty. It’s too early to be looking like I’m in a Nicki Minaj video.” Watching Good Morning America, the actress wishes she could fall back asleep. “I need to get on Katy Perry’s level. She lies down when she gets hair and makeup!”

9:00 a.m. Grin and Bear It
A short drive brings her to Radio City Music Hall for the NBC Upfronts. Staring at the carpet, she says, “I’m nervous I’m going to be in pain. I have a bad back and ankle.” Over the next hour, she does interviews and poses with Good Girls costars Mae Whitman and Christina Hendricks. “Even though the photographers are yelling, I just look from left to right and try to make eye contact with each. I’m not standing here all day!” Walking inside for the presentation, “I’m like, ‘Where’s the Tylenol?’”

10:30 a.m. Meal Time
After watching Seth Meyers crush his stand-up from backstage, she grabs lunch at Quality Meats with Whitman and Hendricks. (“We text constantly!”) On the menu: tomahawk steak, corn creme brûlée and pecan pie ice cream. Finally, back at the hotel by 3:30, she takes an hour-long nap. “I’m like, ‘Sh-t, I slept in my updo!’ I have to throw together my hair and fix my makeup.” After all, it’s almost party time!

6:30 p.m. VIP
With her back and ankle still aching, she is allowed to cut the line at the first fete. (“I feel like Nicole Kidman!”) Inside, she finds a cozy spot and chats with the Brooklyn Nine-Nine’s Stephanie Beatriz and Melissa Fumero. “If I am at your party, you will see me on a couch with a drink — or two.”

An hour later, she’s off to NBC’s bash. But on her way out, she sees a man rudely cut by security. Though she tries to step in and help, “the guy tries to take it out on me. I got back in his face! There is no way this guy in his new hat and pressed shirt was going to fight a girl in a maxi dress.” Watching nearby, her friend, heart racing, steps in. Jokes Retta, “She tells people she saved me from a street fight!”

At Del Posto for party No. 2, she runs into Kristin Chenoweth, who raves to her about Good Girls. She then finds Hendricks and pal Taylor Kinney: “We have a couch photo shoot!” 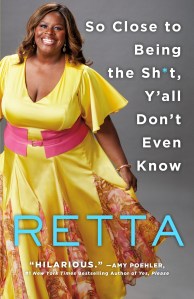 12:45 a.m. After Hours
Climbing into three SUVs, the crew treks to a piano bar. As vodka sodas flow, Retta performs three songs — including “Killing Me Softly” and “Summertime” — then Hendricks takes the mic to sing “Makin’ Whoopee.” In awe, “I’m like, ‘Christina can moonlight as a lounge singer!’” By 4 a.m., it’s closing time. “Enough is enough.” She crawls into bed — and sleeps ’til noon!

Retta’s essay collection, So Close to Being the Sh*t, Y’all Don’t Even Know, hits shelves May 29.

Sarah Michelle Gellar Admits Her and Freddie Prinze Jr.’s Parenting ‘Expectations Are a Little Higher Than Most’
Shoppers Say This Is the Softest Cardigan You’ll Ever Own
La Adelita Tequila: The Hottest New Drink in Aspen
END_OF_DOCUMENT_TOKEN_TO_BE_REPLACED