The Bra Lady Gaga Loves With Nearly 3,000 Reviews
Shoppers Say This Is the Softest Cardigan You’ll Ever Own
77.9% of Users Sustained Weight Loss Over 9 Months Using This Program
END_OF_DOCUMENT_TOKEN_TO_BE_REPLACED

Earlier this month, President Donald Trump claimed without offering any proof that Barack Obama wiretapped Trump Tower during the 2016 election. Conway, 50, responded to the allegations in an interview with the Bergen County Record on Sunday, March 12. “What I can say is there are many ways to surveil each other now, unfortunately,” she said. “There was an article this week that talked about how you can surveil someone through their phones, through their — certainly through their television sets, any number of different ways, and microwaves that turn into cameras, etc., so we know that that is just a fact of modern life.”

First Kids Through the Years, From Alice Roosevelt to Barron Trump

Conway, who said that she has no evidence for the wiretapping, was ridiculed on social media over the remarks. Colbert, 52, meanwhile, took it one step further by showing viewers a glimpse of his very own microwave camera.

“Trump adviser and stepmom who is trying to replace your mother Kellyanne Conway explained yesterday that just because there’s no evidence that his phone was wiretapped, doesn’t mean Trump is wrong,” Colbert said on Monday night. “It’s true, it’s true — microwaves that turn into cameras. How do you think we film this show?” 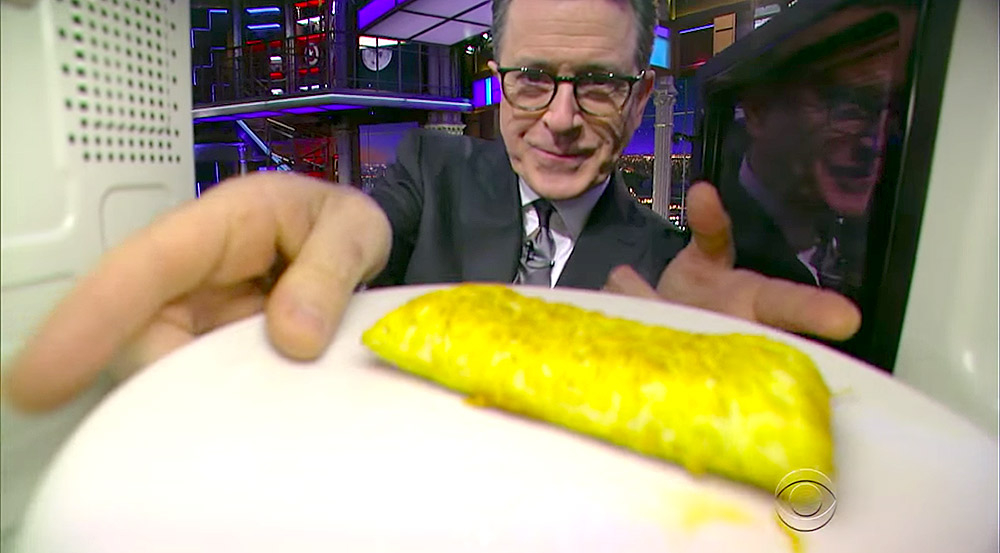 The late-night host then interrupted his own monologue to grab a snack. “Oh, excuse me, my Hot Pocket is done,” he said. “By the way, President Obama, I miss you.”

Speaking directly into the appliance, he added: “On second thought, can I please come in there with you? We need a bigger microwave.”

Hours before the show aired, White House press secretary Sean Spicer backtracked on Trump’s allegations. “I think there’s no question that the Obama administration, that there were actions about surveillance and other activities that occurred in the 2016 election,” Spicer said during a briefing. “The president used the word wiretaps in quotes to mean, broadly, surveillance and other activities.”

Obama’s spokesperson Kevin Lewis denied the claims on March 4. “A cardinal rule of the Obama Administration was that no White House official ever interfered with any independent investigation led by the Department of Justice,” he said in a statement. “As part of that practice, neither President Obama nor any White House official ever ordered surveillance on any U.S. citizen. Any suggestion otherwise is simply false.”

The House Intelligence Committee has given the Justice Department until March 20 to provide evidence related to Trump’s wiretapping claims. The former Celebrity Apprentice host, 70, has not commented on the matter since his March 4 tweets.

The Bra Lady Gaga Loves With Nearly 3,000 Reviews
Shoppers Say This Is the Softest Cardigan You’ll Ever Own
77.9% of Users Sustained Weight Loss Over 9 Months Using This Program
END_OF_DOCUMENT_TOKEN_TO_BE_REPLACED