The famed chef, who is known for being one of the earliest pioneers of the food truck craze – thanks to his own gourmet Korean taco truck, Kogi, – recently partnered with KeVita and is on a mission to make fermented foods more mainstream.

“I don’t endorse that many things, and when I do… it’s very important for me to do it with someone that I either use in my daily life, or that I admire,” Choi tells Us Weekly of his partnership with KeVita, a beverage company that produces fermented drinks. “I have been drinking KeVita since even before they approached me. It was my kombucha of choice and it was just something I drank on my own already, so when they reached out it just all made sense for me.”

Still, even though Choi has been snacking on fermented foods such as kimchi and soybean paste since he was “born,” he’s well aware that those who haven’t grown up eating such delicacies are often reluctant to give them a try even though “fermented foods are all around us.”

As he explains, “Sometimes in our Western American lifestyle we don’t think they’re around us, but beer is a fermented food, and wine. It’s all there. It’s there right in front of us and we shouldn’t be scared of it. It’s something that we need to bring further and further into our daily life and culture because it really does make a difference.”

Studies have shown that fermented foods have health benefits ranging from the ability to aid digestion to the development of healthy hair and teeth, but Choi doesn’t just want people to eat them simply because they’re good for the body. That’s why he’s created recipes with KeVita products that prioritize the deliciousness of the food.

“If you’ll see in a lot of the recipes we’ve created, it’s first about just making great food, and thinking smartly about the KeVita drinks and how they interplay into the recipe, and then ultimately making the whole thing so you just want to eat it and devour it,” he explains, adding that the fermented aspect is just an added bonus. “Fermentation doesn’t need a bodyguard. It doesn’t need a PR rep. You don’t need someone to explain it to your body, your body fully understands what’s going on.”

For Choi’s lime mint coconut mojita recipe, which uses KeVita’s Sparkling Probiotic Mojita Lime Mint Coconut drink, he tells Us, “I was looking through the lens of Indian culture in Asia and Korea, where we eat a lot of creamy but bubbly drinks, like lassi and yogurt drinks.” 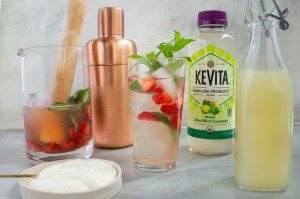 However, since “bubbly milk” is “not really so popular in the Western palate,” Choi chose to blend two well-known beverages together instead. “I wanted just look at through the lense of, ‘What if a mojito met a lassi?’” he explains.

Check out the complete recipe below, and note that it can be made with or without rum!