A summer anthem and a global movement.

Saweetie is inspiring her fans with her new music and making a call to action to fight systemic racism, speaking all about it on Us Weekly’s “Hot Hollywood” podcast.

The singer, 26, has dropped another summer anthem following 2019’s “My Type” and her debut single, “Icy Grl.” Her latest release, “Tap In,” not only has a sound for the club, but also an underlying message which Saweetie has been promoting on social media. “I’ve been doing my ‘Tap In’ on Twitter called ‘The Pretty Girl Tap In,’” the songstress explained to Us. “It’s just a way for my fans to get quarantine cute, dropping pictures with their favorite filters, checking in on each other. Like a mental health tap in. So I feel the song is fun, but has an underlying message of just tapping into different things, whether it’s social issues, your homegirls, fashion, all of the above.”

The single is off her upcoming album, Pretty Bitch Music, with the “My Type” singer noting that the usage of “bitch” in the title as an acronym: Bossy, Independent, Tough, Creative, Hyphy —which Saweetie says was inspired by Tupac. The word “pretty” also has its own voice, with Saweetie explaining, “Pretty is like, what is your pretty? How does it make you feel? Because the social media standard of being a bad bitch or being pretty, it doesn’t fit everybody,” she said. “My fans come in all shapes, sizes, skin tones, backgrounds. I want them to all feel bomb as f–k. Because when they do listen to my music, I make them feel like a bad bitch.”

And if “Tap In” sounds familiar to hip-hop fans, you’re not mistaken. The “Up Now” singer sampled Too Short’s Bay Area 2006 classic, “Blow the Whistle.” “I’m happy that I got his blessing because he from the Bay, I’m from the Bay,” Saweetie told Us. “And the fact that I’m able to put my own twist on it and make it modern for my generation and Generation Z and everybody else, I think it’s a cool moment for hip hop history.” 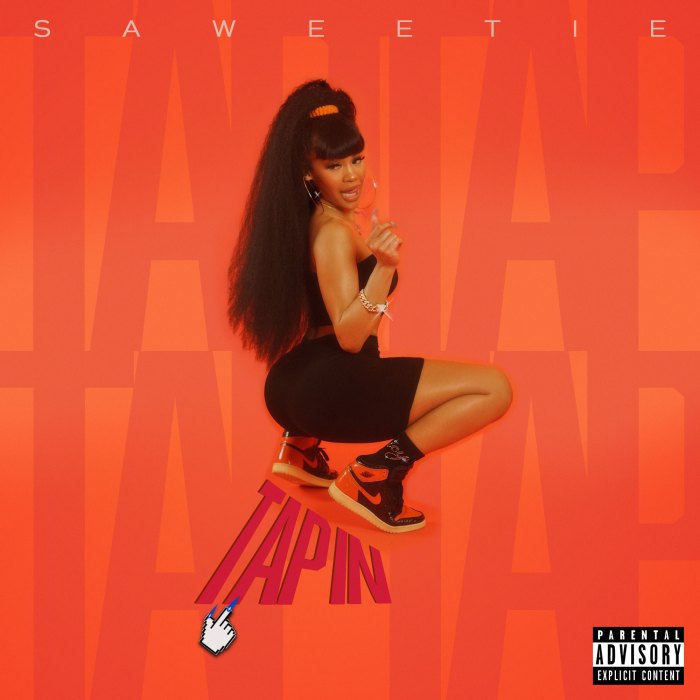 Something else the “Focus” rapper is doing for her generation is a call to action to support Black Lives Matter. As someone who grew up with a black father, uncles and grandfather whom she has witnessed be racially profiled throughout her life, Saweetie talks about the importance of this generation coming together to create change. “I just feel like it’s my duty, along with my peers, to kind of harness the younger generation because if we’re not educated — which I wasn’t as a kid — to vote, we feel like our opinion doesn’t matter when, in all actuality, it does,” she urged. “My whole thing is just educating my generation, the younger generation to let them know that their opinion and their voice matters. So when it comes time in November, it is our duty to go out there and vote.”

The rapper — whose At Home With Saweetie and PrettyLittleThing collaboration is donating 100 percent of all profits to Black Lives Matter — finds inspiration for being a voice for her fans through her grandmother. “I like to know someone who has been a part of this movement since my age,” the “Tip Toes” singer told Us. “She’s been doing this since even younger than me. She’s very devoted to making a change in the black community. So that’s somebody who I talk to on the phone almost every morning and throughout the day. She kind of keeps me informed on what’s happening.”

Along with urging schools to highlight black history in textbooks, Saweetie also spoke her mind on the recent controversy surrounding Hannah Brown. “I feel like if you’re not black, period, you shouldn’t be saying it,” she told Us. “So whether if you’re white or something else, if you’re not black, don’t say the N-word. And that’s all I got to say to that.”

Saweetie fans stand up because there is much more to come from this hitmaker as she tells Us, “I’m here for a long time and a good time. So, I’m excited to see what the years are to come.”

Kardashian Couple Check! Where Do Kourtney and Scott Stand Today?
Kourtney Kardashian and Scott Disick may be fueling reconciliation speculation, but sometimes a flannel shirt is just a flannel shirt. Mason Disick Through the Years Read article As exclusively revealed...
Flip podcast card

How Rob Kardashian Got Back to a ‘Good Place’ Mentally and Physically
Rob Kardashian has been “taking really good care of himself,” a source exclusively tells Us Weekly. Rob Kardashian Through the Years Read article As first revealed on our “Hot Hollywood” podcast,...
Flip podcast card

Monyetta Shaw Gushes Over Fiance Heath, Talks Coparenting With Ex Ne-Yo
Finding love after her split from Ne-Yo didn’t happen overnight for Monyetta Shaw, but now the Atlanta Exes star is happier than ever — and ready to talk about her fiancé, Heath, publicly for the first time. Celebrity...
Flip podcast card

Garcelle Beauvais on Why She Unfollowed Lisa Rinna After ‘Intense’ Reunion
Garcelle Beauvais has made it clear she’s team Denise Richards when it comes to the Real Housewives of Beverly Hills drama, but does that mean her friendship with Lisa Rinna is over for good? Inside the Dramatic...
Flip podcast card