UPDATE: Sources now report that the shadow-y areas under Gigi Hadid’s arms was created by residue from a jacket the model wore on-set during the shoot. Whether the fuzz is real or faux, we think the real focal point is her impressive biceps!

ORIGINAL POST: Love magazine’s eagerly awaited 2017 Advent Calendar has been delivering in spades this year, and Gigi Hadid’s Day 11 contribution may have just given us the stand-out highlight of the month! Spoiler: It features armpit hair.

In her video, which debuted on Monday, December 11, as is previewed in the Instagram clip above, the model can be seen in a red sports bra with matching shorts and sultry wine-hued eyeshadow. After opening with “I’m Gigi Hadid. Today’s free-form day,” she’s seen doing a series of punches and spin kicks, slamming a volleyball and flipping her hair. She then gives the world two tickets to “the gun show” by flexing her biceps. Her parting words? “Stay strong.”

The elder Hadid sister, 22, was excited to participate, according to her statement about her shoot. “I love seeing everyone else’s videos. It’s celebratory of epic human beings and always pushes boundaries,” she says. “The fashion circle is a family, so the Love Advent kind of feels like a Holiday Year Book in a way. Headmaster Grand style.” 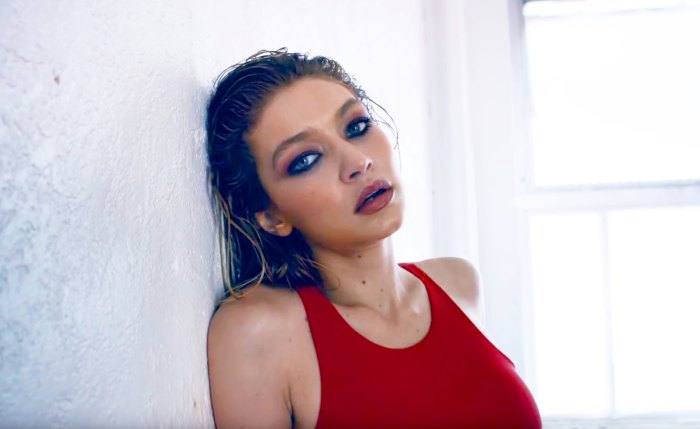 It’s not surprising to see a volleyball make a cameo in her mini-movie — the Maybelline spokesperson seriously considered becoming a professional volleyball player before she took to the catwalk full-time. And she spilled to Us in 2015 she thinks her athletic build helped her catch attention in the industry. “It’s funny because once you start to embrace what you have, it starts to be what you’re known for. I’m kind of the model that everyone thought would always be the Sports Illustrated girl — then when I started to do high fashion stuff…people were like, ‘Oh so we can have a girl with like thighs and a butt in a Tom Ford campaign, cool.’”

Want more of Love’s Advent Calendar? Check out Emily Ratajkowski’s pasta-fueled fantasy. Who knew spaghetti could be so flattering to wear?