Patterns and colors and jewels, oh my!

If you’ve been coveting Mindy Lahiri’s always eye-popping styles on the third season of The Mindy Project (and, honestly, who hasn’t?), now is your chance to own one of them—straight from her closet. Mindy Kaling and her hit FOX show have partnered with eBay to auction off three of her ensembles from the upcoming final two episodes of the season for a cause close to the star and show creator’s heart.

“I’m so excited to be auctioning off outfits from The Mindy Project to benefit the Pancreatic Cancer Action Network,” Kaling, who lost her mother to the deadly disease in 2012, said in a statement. “It is an amazing organization that provides so much support for people with this devastating illness and their families.” 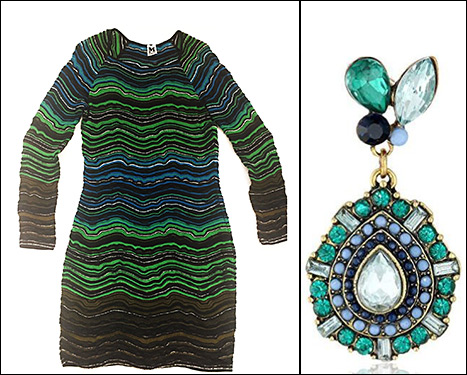 The first two outfits, which are live now until Thursday, March 19, are in shades of blue and green—and all from fun labels. There’s a cityscape-print Milly skirt, a printed Emanuel Ungaro short-sleeved top, a cerulean Ralph Lauren suede belt, two pairs of bedazzled earrings (courtesy of Juicy Couture and Betsey Johnson), and a striped knit dress by M Missoni.

The third ensemble (from the finale, airing on March 24) kicks off next Tuesday.

Will you be bidding on one of Mindy’s outfits? Tweet with @UsWeekly using the hashtag #stylebyUs!