Celebs are just like Us: they rewear dresses they spent a lot of money on! While hosting Saturday Night Live on November 11, Tiffany Haddish rocked a $4,000 white Alexander McQueen gown that she also wore for the Girls’ Trip premiere back in July.

“Like this dress!” she explained. “I wore it on the red carpet for Girls’ Trip and my whole team, they told me, ‘Tiffany, you cannot wear that dress on SNL. You already wore it. It’s taboo to wear it twice,’ and I said, ‘I don’t give a dang about no taboo.’”

“I spent a lot of money on this dress!” the 37-year-old comedian revealed. “This dress cost way more than my mortgage … this is an Alexander McQueen, okay? It’s a $4,000 dress. I’m [going to] wear this dress multiple times! Real talk. You might see this dress in two sketches tonight, okay?”

Haddish went on to joke that if she’s invited to a bat mitzvah, an all-black party or a wedding, she’d be wearing the white McQueen gown. She said she’d even wear it to her own funeral! 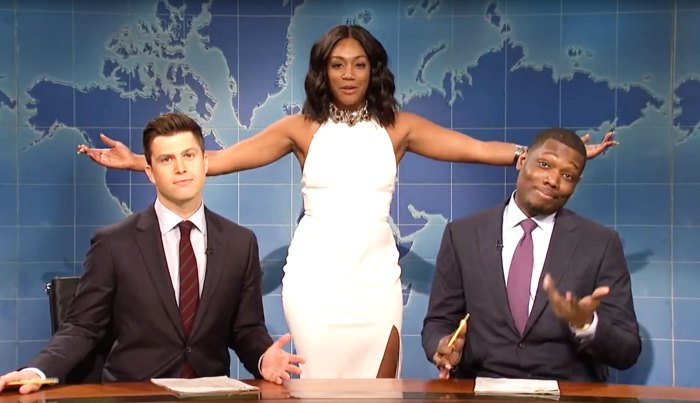 True to her word, she donned the McQueen dress again after her monologue, popping up during Weekend Update. “I told y’all I was gonna wear this dress again!” she said as she danced across the set.

Stylish totally gets it. When you splurge on a designer item, you want to show it off as much as possible. You keep doing you, Tiffany!