Get Your Glow On With These 10 Spring and Summer Must-Have Beauty Products
‘Vanderpump Rules’ Reunion Taping Postponed: 7 Questions We Need Answered at the Reunion
Stars Affected by the Coronavirus Pandemic: Tom Hanks, Orlando Bloom and More
END_OF_DOCUMENT_TOKEN_TO_BE_REPLACED

Making mature decisions. Khloé Kardashian is trying to keep things civil with ex Tristan Thompson for the sake of their daughter, True.

When the Good American founder, 34, found out that the father of her child, 27, had cheated on her with her sister Kylie Jenner’s longtime best friend, Jordyn Woods, she felt “disappointed” and “so betrayed,” a source reveals in the new issue of Us Weekly.

Kylie Jenner and Jordyn Woods’ Friendship Through the Years

Though Kardashian stayed with the NBA star through his first cheating scandal (which became public just days before the birth of their daughter in April 2018), this time around, she was done with him.

Kardashian has been feeling this breakup “intensely” in the week since, a source tells Us, adding that in the days immediately following his February 19 betrayal, the reality star “wasn’t speaking” to her former boyfriend at all.

A Timeline of Tristan Thompson and Jordyn Woods’ Cheating Scandal

What hurts her the most is knowing that her little girl’s parents won’t be together. “It’s more a disappointment about what will never be for True,” said a pal. “Khloé stayed with Tristan because of True, hoping to be a family forever.” The whole mess “is a very sad situation for everyone,” adds a Kardashian family source.

At the same time, it’s the 10-month-old that is helping her heal. ”Khloé’s entire world is True,” said the insider. “That’s helping her heart.” And the Revenge Body host knows that it would be best for her daughter if she and Thompson could get along.

“Tristan and Khloe are co-parenting a child together. That’s not really the issue,” said a source. “She’s doing her best to keep them on good terms.” 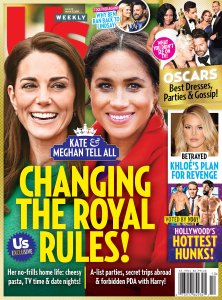 For more on Kardashian and Thompson’s messy breakup, check out the video above.

And for even more on the scandal — including an introduction to 21-year-old Woods — pick up the new issue of Us Weekly, on stands now.

Get Your Glow On With These 10 Spring and Summer Must-Have Beauty Products
‘Vanderpump Rules’ Reunion Taping Postponed: 7 Questions We Need Answered at the Reunion
Stars Affected by the Coronavirus Pandemic: Tom Hanks, Orlando Bloom and More
END_OF_DOCUMENT_TOKEN_TO_BE_REPLACED