SAG Awards 2020: 5 Nominees to Watch
Everything to Know About the SAG Awards 2020: Nominees, Presenters, How to Watch and More
Jillian Michaels Refuses To Apologize After Fans Accuse Her Of Fat-Shaming Lizzo
END_OF_DOCUMENT_TOKEN_TO_BE_REPLACED

The personal trainer, 25, “only wants the best for Britney, her boys and her happiness,” an insider exclusively reveals in the new issue of Us Weekly. “He tries to keep her levelheaded and calm whenever there’s drama within her family. They really do love each other.”

Federline, 41, filed a police report following a heated argument between Sean Preston and his grandfather, 67, at Jamie’s condo on August 24, a law enforcement source told Us. “Sean Preston felt unsafe and locked himself into a room. Jamie broke into the room and shook Sean Preston,” the insider said. “Fortunately, Britney did the right thing and took her boys to safety and away from her father. The whole incident was very upsetting to her and her boys. Kevin was and still is furious.”

Following the altercation, the DJ was granted a temporary restraining order against Jamie that prohibits him from coming near Sean and his brother, Jayden James, 12, for three years.

Britney Spears and Sam Asghari: A Timeline of Their Relationship

The incident came as Britney and her ex-husband’s custody agreement was changed. The former backup dancer will have custody of the boys 70 percent of the time, which was an informal arrangement since August 2018 but was made official in court on August 28. The pair previously had 50-50 custody. 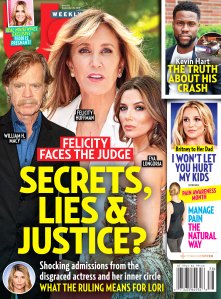 For more on Spears, pick up the latest issue of Us Weekly, on newsstands now.

With reporting by Nicholas Hautman and Jen Heger

SAG Awards 2020: 5 Nominees to Watch
Everything to Know About the SAG Awards 2020: Nominees, Presenters, How to Watch and More
Jillian Michaels Refuses To Apologize After Fans Accuse Her Of Fat-Shaming Lizzo
END_OF_DOCUMENT_TOKEN_TO_BE_REPLACED