Get Your Glow On With These 10 Spring and Summer Must-Have Beauty Products
‘Vanderpump Rules’ Reunion Taping Postponed: 7 Questions We Need Answered at the Reunion
Stars Affected by the Coronavirus Pandemic: Tom Hanks, Orlando Bloom and More
END_OF_DOCUMENT_TOKEN_TO_BE_REPLACED

Uh, awkward. Donald Trump joked that he had “sex” in common with his daughter Ivanka Trump in a recently resurfaced, cringeworthy February 2013 interview on The Wendy Williams Show, which you can watch in the clip above.

During a Q&A game called Fave Five, host Wendy Williams asked Ivanka, now 34, about her favorite thing she and her father had in common. “Either real estate or golf,” she innocently replied.

PHOTOS: 12 Times Donald Trump Has Body-Shamed Stars Over the Years

Williams, 52, then asked Donald, 70, the same question, prompting an unexpected response. “Well, I was going to say sex, but I can’t relate that to her,” he said, pointing to his eldest daughter, who was visibly mortified by the response. 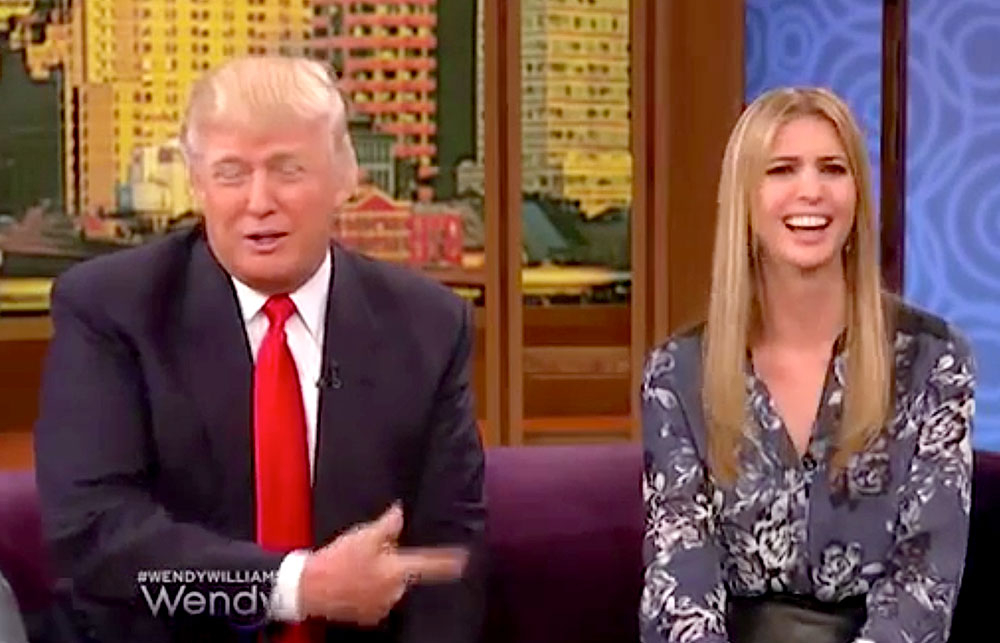 The suggestive comment wasn’t the first time the real estate mogul’s first about Ivanka. In 2004, Donald discussed his daughter’s physique during an interview with Howard Stern.

“My daughter is beautiful, Ivanka,” he said at the time. The 62-year-old shock jock then said, “Can I say this? A piece of ass.” Donald agreed, simply adding, “Yeah.”

Two years later, the pals had yet another awkward exchange as Stern noted that Ivanka looked “more voluptuous than ever” and asked Donald if she had gotten breast implants.

PHOTOS: Stars and Their Dads

After the “piece of ass” comment resurfaced online during the 2016 presidential election, Ivanka’ Twitter account liked a tweet about the story. A source close to Ivanka’s company later told Us Weekly that “a simple mistake was made by a staff member” by liking the post.

Get Your Glow On With These 10 Spring and Summer Must-Have Beauty Products
‘Vanderpump Rules’ Reunion Taping Postponed: 7 Questions We Need Answered at the Reunion
Stars Affected by the Coronavirus Pandemic: Tom Hanks, Orlando Bloom and More
END_OF_DOCUMENT_TOKEN_TO_BE_REPLACED