Sarah Michelle Gellar Admits Her and Freddie Prinze Jr.’s Parenting ‘Expectations Are a Little Higher Than Most’
Shoppers Say This Is the Softest Cardigan You’ll Ever Own
La Adelita Tequila: The Hottest New Drink in Aspen
END_OF_DOCUMENT_TOKEN_TO_BE_REPLACED

A royal outing! All eyes will be on Prince Harry and Duchess Meghan as they return to the continent where it all began — this time, with their infant son, Archie. Us Weekly has learned exclusive new details about the Sussex two-week visit to Africa in October, including everything from their 2-month-old’s vaccines and newly hired nanny to the Duke of Sussex’s plans to honor the important humanitarian work his mother, Princess Diana, did there just a few months before her death in 1997.

“Africa is an extremely important continent for Harry and Meghan,” a source tells Us. “It’s not only where Harry was able to spend time away from the public eye growing up — and where Diana made a difference — but it’s also where their love grew. Going back there will be so special for them now that they’re a family.” As plans firm up, the couple are taking things “very seriously,” adds an insider, “to make sure that Archie remains safe and happy throughout.”

The trip, which marks the Duchess of Sussex’s official return to work after maternity leave, features an ambitious itinerary. So far, says a source, they’re planning to visit four countries: Malawi, where the duke’s Sentebale charity, which is dedicated to supporting young people affected by HIV and AIDS, is expanding; Angola, whose government just pledged $60 million to clear the last land mines that remain following decades of military conflict — something Diana famously shined a light on in 1997; the couple’s beloved Botswana, where they vacationed shortly after they met and will continue the prince’s work with wildlife conservationists; and South Africa, where it’s believed the tour will start.

But their No. 1 priority isn’t work — it’s maintaining the security and contentment of Archie, who’ll be only 5 months old. According to an insider, Archie “was set to have his first vaccinations [in June].” But because there are so many inoculations required for travel within Africa, explains the source, “it’s likely that Archie will only be present on certain safer parts of the trip, such as South Africa, leaving Harry and Meghan to travel by themselves to engagements in other countries.”

They’re taking advice from Prince William and Duchess Kate, who learned during their 2014 tour of New Zealand and Australia with then-baby Prince George that they needed to “establish a base they can commute from, rather than spend the nights in lots of different countries,” adds the source. “Harry and Meghan are planning to do the same with Archie.”

The world can’t wait to get another look at the young royal — but they’ll need to manage expectations, warns the source. The public won’t be treated to “[constant] sightings,” the source explains. “Archie’s going with his parents because they don’t want to leave him behind in the U.K., not because they want to show him off at every stop.” But Harry and Meghan are, of course, “planning one or two public moments with him.” 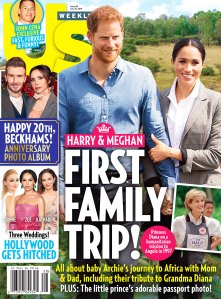 For more on the royal family, watch the video above and pick up the latest issue of Us Weekly, on newsstands now!

With reporting by Travis Cronin and Natalie Posner

Sarah Michelle Gellar Admits Her and Freddie Prinze Jr.’s Parenting ‘Expectations Are a Little Higher Than Most’
Shoppers Say This Is the Softest Cardigan You’ll Ever Own
La Adelita Tequila: The Hottest New Drink in Aspen
END_OF_DOCUMENT_TOKEN_TO_BE_REPLACED