Road to recovery! Ryan Edwards’ wife, Mackenzie Edwards, took their son, Jagger, and Ryan’s son, Bentley, trick-or-treating on Wednesday, October 31, and shared a photo of the three of them on Instagram.

Teen Mom Stars, Then and Now

Ryan, 30, and Mackenzie, 21, welcomed their first son together, Jagger, in early October and have yet to reveal a photo of him – in this Instagram, there is a pumpkin emoji hiding his face.

Many fans noticed that Ryan was not in the photo, asking where he was in the comments. The Teen Mom OG star entered a rehab facility in Alabama in September 2018. However, it sounds like he’s on the right track. 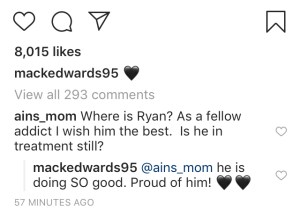 “He is doing SO good,” Mackenzie responded when a fan commented on her pic. “Proud of him!”

It appears that Bentley, who Ryan shares with ex Maci Bookout, spent Halloween with both of his parents. Two hours before Mackenzie posted her photo, Bookout posted on her Instagram showing that Bentley was dressed as Scooby Doo and was out and about with her husband, Taylor McKinney, and their two children, Jayde, 3, and Maverick, 2.

Bookout and her family – with the exception of Bentley – have a restraining order against Ryan, which they put in motion after Ryan allegedly threatened to come to the house and kill McKinney.

Ryan was arrested on March 27 for violating his probation terms stemming from a previous heroin possession charge, then again on July 23, on two counts of simple possession of heroin, petition to revoke. Two days before his second arrest, Mackenzie revealed the couple would not be appearing on upcoming episodes of Teen Mom OG, claiming MTV doesn’t “want to show Ryan as a recovering addict.”

Maci, Catelynn and Amber Reflect on 8 Seasons of ‘Teen Mom’

However, she did briefly appear on the Monday, October 29, episode.