Ariana Grande went there. The pop star made some subtle — and other not-so-subtle — references to her exes Pete Davidson, Mac Miller and Big Sean in her music video for “Thank U, Next,” which dropped on Friday, November 30.

Ariana Grande’s Dating History: A Timeline of Her Exes and Flings

Grande, 25, has been teasing the video, which includes scenes from iconic movies Bring It On, Mean Girls, Legally Blonde and 13 Going on 30, for her breakup anthem for weeks. Other highlights included Kris Jenner channeling the role of Mean Girls’ Mrs. George (played by Amy Poehler in the 2004 film) and Jennifer Coolidge reprising her role as Legally Blonde’s Paulette Bonafonté. 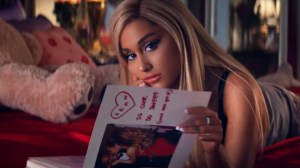 Watch the video above for all of the blink-and-you’ll-miss-it references from “Thank U, Next.”