Free Samples! Have Top Health & Wellness Picks Shipped to You at No Cost
These Denim Joggers Are Our Secret to Cool, Casual Comfort
These Stunning Ruched One-Piece Swimsuits Show Just the Right Amount of Skin
END_OF_DOCUMENT_TOKEN_TO_BE_REPLACED

Gone but never forgotten. Riverdale paid tribute to Luke Perry during the Wednesday, March 6, episode credits. The late actor’s name flashed across the screen alongside the words, “In memoriam.” 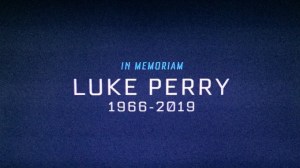 Perry, who died at age 52 on Monday, March 4, after suffering a massive stroke, portrayed Fred Andrews on the CW drama. The show’s executive producer Roberto Aguirre-Sacasa revealed via Twitter on Wednesday, March 6, that all future episodes will be dedicated to Perry.

Earlier on Wednesday, Aguirre-Sacasa, along with fellow executive producers Greg Berlanti, Sarah Schechter and Jon Goldwater, released a statement regarding Perry’s untimely passing: “A beloved member of the Riverdale, Warner Bros. and CW family, Luke was everything you would hope he would be: an incredibly caring, consummate professional with a giant heart and a true friend to all.”

Luke Perry Through the Years: From ‘Beverly Hills, 90210’ to ‘Riverdale’

The cast also honored the Beverly Hills, 90210 alum with heartfelt social media messages. “I’m finding it hard to grasp that he will no longer be around to give long hugs and share his wisdom and kindness with all of us,” Lili Reinhart (Betty Cooper) tweeted on Monday. “I’m thinking of his family. His children, I pray for them to heal and find peace in this devastating loss. I just can’t believe it.”

Molly Ringwald, who portrays Perry’s estranged wife, Mary Andrews, also tweeted on Monday: “My heart is broken. I will miss you so much Luke Perry. Sending all my love to your family. #LukePerry.”

Perry spoke to Us Weekly exclusively in October 2018 about how much starring on Riverdale has meant to him and how he enjoys acting as a father figure to the younger cast members. “The thing I tell them, and I know this with my experience from 90210, this show will come and go, but you have these people for the rest of your life,” he told Us at the time of the close-knit cast and crew. “That’s one of the greatest takeaways of this situation. You can have these friends for the rest of your life.”

Free Samples! Have Top Health & Wellness Picks Shipped to You at No Cost
These Denim Joggers Are Our Secret to Cool, Casual Comfort
These Stunning Ruched One-Piece Swimsuits Show Just the Right Amount of Skin
END_OF_DOCUMENT_TOKEN_TO_BE_REPLACED
Close widget