‘The Bachelorette’ Season 16: Everything We Know
These Denim Joggers Are Our Secret to Cool, Casual Comfort
These Stunning Ruched One-Piece Swimsuits Show Just the Right Amount of Skin
END_OF_DOCUMENT_TOKEN_TO_BE_REPLACED

Tattoo snafu! Ariana Grande attempted to fix her botched “7 Rings” hand tattoo, but she still hasn’t gotten it quite right, according to multiple outlets including BuzzFeed.

The “Breathin” singer, 25, initially debuted a new piece of hand art on Twitter on Tuesday, January 29, which she thought spelled out the title of her most recent hit, “7 Rings.”

A Japanese-speaking commenter pointed out a massive error in the artwork, however, noting that she was missing several characters from the phrase, resulting in a tattoo that promoted “Japanese-style BBQ grills.”

The musician was quick to respond, laughing off her mistake. “Indeed, I left out “つの指” which should have gone in between,” she conceded in a now-deleted tweet. “It hurt like f–k n still looks tight. I wouldn’t have lasted one more symbol lmao. But this spot also peels a ton and won’t last so if I miss it enough I’ll suffer thru the whole thing next time.”

“Also….. huge fan of tiny BBQ grills,” she joked in a subsequent tweet.

Grande attempted to correct the flub shortly after, however: On Wednesday, January 30, she posted several text exchanges on Instagram Stories that she had with a “tutor,” who advised her to add an additional kanji above and between the characters she already had in order to say “7 Rings” when read from top to bottom, as is custom in Japanese “tategaki,” or vertical writing. 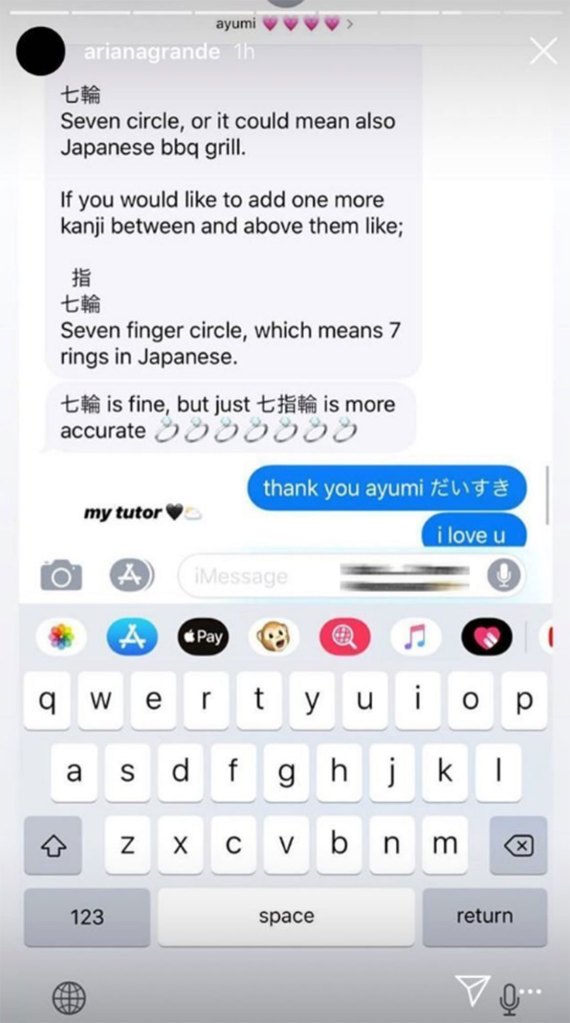 The Grammy nominee posted a shot of the updated ink to Instagram on Thursday, January 31, writing, “Slightly better. Thanks to my tutor for helping me fix and to @kanenavasard for being a legend. And to my doctor for the lidocaine shots (no joke). RIP tiny charcoal grill. Miss u man. I actually really liked u.”

Unfortunately for Grande, the recommended symbol she added to her artwork was placed below her original ink, changing its translation.

Grande has yet to respond to the second inaccuracy.

The “Thank U, Next” crooner has previously covered up several other tattoos, including a finger tattoo of ex-fiancé Pete Davidson’s name, which she covered with a black heart, and a tribute to Davidson’s father, who died in 9/11, which she inked over with a picture of her late ex Mac Miller’s dog. (Miller died in September of a mixed drug toxicity).

‘The Bachelorette’ Season 16: Everything We Know
These Denim Joggers Are Our Secret to Cool, Casual Comfort
These Stunning Ruched One-Piece Swimsuits Show Just the Right Amount of Skin
END_OF_DOCUMENT_TOKEN_TO_BE_REPLACED