Duchess Meghan already has plans to be financially independent of Prince Harry’s family, a source reveals in the new issue of Us Weekly.

How the Royals Have Transformed Through the Decade in Photos

According to the source, the Duke and Duchess of Sussex’s relationship with his dad, Prince Charles, may get even more complicated thanks to the royal family’s reported $88 billion fortune. The source notes that Meghan, 38, and Harry, 35, currently get 95 percent of their income from Charles — a reported royal stipend of $6.5 million.

“So now it’s a question of whether Charles will decide to keep paying them or not,” a second insider explains, noting the Suits alum is already returning to her Hollywood roots.

In addition to signing a deal with Disney to do voiceover work in exchange for a donation to Elephants Without Borders, the insider says Meghan’s hoping to land some producing and directing gigs too.

Everything We Know About Their Meghan and Harry's Royal Path

“She wants to do documentaries focusing on her charities,” the insider tells Us, noting that there are whispers of a possible talk show. “Meghan’s determined to break free from royal life and Harry’s standing by her all the way. They’re both ready for a new start.”

Harry and Meghan made waves on January 8 after they announced their plans to step back from their roles as senior royals. After the couple’s surprising decision, Queen Elizabeth II held a meeting with Harry, Prince William and Charles to discuss the next moves for the twosome.

“My family and I are entirely supportive of Harry and Meghan’s desire to create a new life as a young family. Although we would have preferred them to remain full-time working Members of the Royal Family, we respect and understand their wish to live a more independent life as a family while remaining a valued part of my family,” the 93-year-old queen said in a statement on Monday, January 13.

Biggest Royal Stories of the Decade

The monarch also confirmed that Meghan and Harry, who share 8-month-old son Archie, have “made clear that they do not want to be reliant on public funds in their new lives.”

“It has therefore been agreed that there will be a period of transition in which the Sussexes will spend time in Canada and the U.K.,” the statement read. “These are complex matters for my family to resolve, and there is some more work to be done, but I have asked for final decisions to be reached in the coming days.” 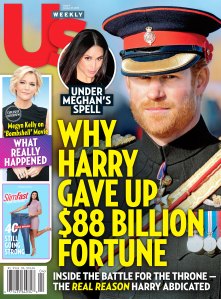 For more on what’s next for Harry and Meghan, watch the video above and pick up the new issue of Us Weekly, on newsstands now!