Sarah Michelle Gellar Admits Her and Freddie Prinze Jr.’s Parenting ‘Expectations Are a Little Higher Than Most’
Shoppers Say This Is the Softest Cardigan You’ll Ever Own
La Adelita Tequila: The Hottest New Drink in Aspen
END_OF_DOCUMENT_TOKEN_TO_BE_REPLACED

In the seven months since she began her role as a Today host, viewers have witnessed Megyn Kelly’s tension-filled conversations with Jane Fonda (the iconic actress bristled when Kelly asked about her plastic surgery) and Debra Messing, who said she was “dismayed” by comments Kelly made during their segment in September. But when the cameras stop rolling, Kelly, 47, can count on cohosts Savannah Guthrie and Hoda Kotb to have her back.

Despite reports the women are feuding, “there is no tension at all,” a source insists in the new issue of Us Weekly. “The ladies are all friends and supportive of each other.”

Biggest Costar Feuds Ever! These Celebrities Can’t Stand Each Other Off-Screen

A second insider told Us last year that Kelly “gets along great” with the entire team at the NBC morning show. “They are all rooting for her.”

Guthrie, 46, has similarly positive things to say about coanchor Kotb, 53, who replaced Matt Lauer after he was fired in November amid sexual misconduct allegations. As the first-ever female duo to helm Today, “something really . . . positive has happened,” Guthrie explained on The Tonight Show With Jimmy Fallon on January 17. Added Kotb of their dynamic: “We had an instant thing.” 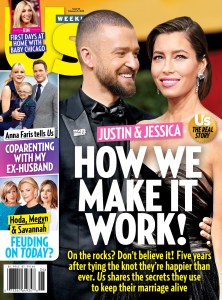 As Kotb and Guthrie head to South Korea to cover February’s Winter Olympics, Kelly will stay back in New York City. But a source previously told Us that Kelly doesn’t feel iced out. “There’s zero strain,” said the insider. Noting Kelly’s show is experiencing “such momentum” recently, the source added: “It just made sense to keep her in New York.”

Sarah Michelle Gellar Admits Her and Freddie Prinze Jr.’s Parenting ‘Expectations Are a Little Higher Than Most’
Shoppers Say This Is the Softest Cardigan You’ll Ever Own
La Adelita Tequila: The Hottest New Drink in Aspen
END_OF_DOCUMENT_TOKEN_TO_BE_REPLACED