As the crow flies, it’s not quite 11 miles from 1600 Pennsylvania Avenue to Andrews Air Force Base, and via Marine One — the presidential helicopter squadron — the journey takes mere minutes. Even that brief amount of time felt too long for Melania Trump on Friday, March 23.

According to the official White House schedule released the previous evening, the first lady was slated to travel on a chopper with her husband, President Donald Trump, from the White House South Lawn to Joint Base Andrews, where Air Force One would whisk the couple away to his Mar-a-Lago resort in Palm Beach, Florida. The president would then stay on for the weekend, while she’d return after their 12-year-old son Barron’s weeklong school break.

When departure time hit, however, Melania chose to take her own motorcade to the base instead, meeting POTUS on the plane and avoiding any photos together. “She’s very independent,” a source explains in the new issue of Us Weekly.

Perhaps more so than the public realizes. The last-minute itinerary change didn’t seem to be a whim, but a direct response to events of the prior evening: On March 22, a former Playboy model named Karen McDougal gave an interview to CNN in which she detailed the 10-month affair she says she had with the president starting in June 2006 — just three months after Melania gave birth to Barron.

Couples Who Stayed Together After Cheating Scandals

McDougal wasn’t the only reported mistress to speak out that week. In January, it was alleged that adult film star Stormy Daniels (real name: Stephanie Clifford) had an affair with Trump starting in 2006 — and was paid $130,000 of hush money by Trump’s team 11 days before Election Day in 2016. Daniels, 39, gave her own explosive tell-all interview to 60 Minutes, which aired on March 25.

Stephanie Grisham, a spokesperson for the first lady, tells Us that since the McDougal and Daniels interviews, Melania, 47, “is focused on being a mom and is quite enjoying spring break at Mar-a-Lago while working on future projects.” But privately, says the Melania source, she’s horrified that “all eyes are on her relationship with her husband. It’s not an easy time for her.”

Another family insider says her emotional state is even worse. “She is very, very unhappy with her life,” says the insider. “If she could, she would get away from Donald and just be with her son.” 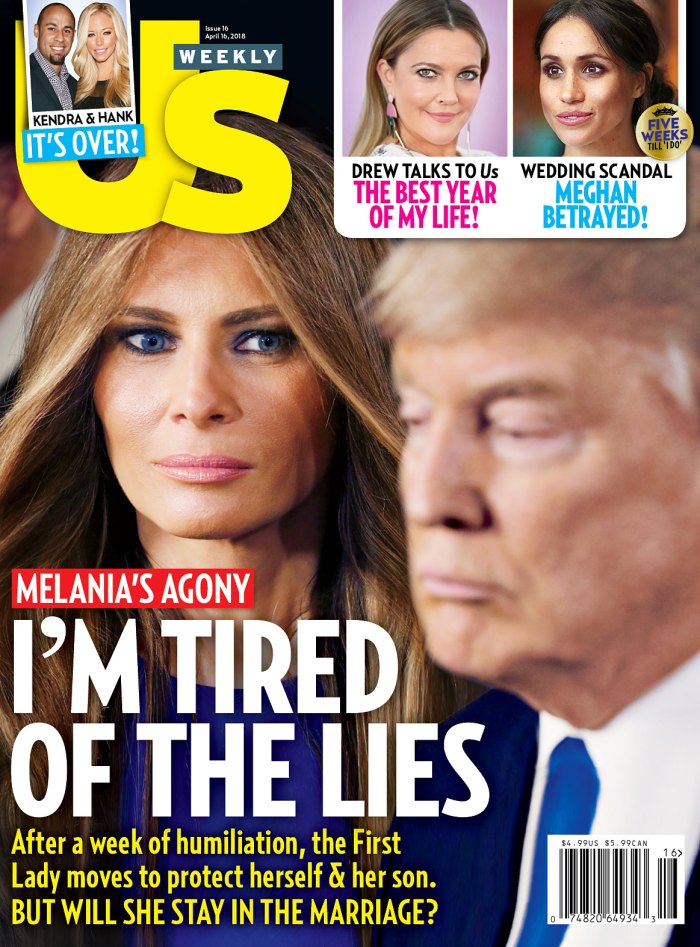 The marital elephant in the room — will Melania finally divorce her husband? — is a quandary President Trump, 71, himself alluded to in a self-deprecating bit at the Gridiron Dinner in D.C. March 3. “So many people have been leaving the White House,” he joked of his administration’s high turnover rate. “Now the question everyone keeps asking is, ‘Who’s going to be the next to leave? [Political advisor] Steve Miller or Melania?’”

Melania has increasingly shown her anger through public gestures. Her March 23 solo motorcade trip wasn’t her first. The Slovenia native pulled the same move on February 16, when the alleged McDougal affair first came to light. The first lady’s trip to the State of the Union address January 30 — shortly after first news of the alleged Daniels affair — was also by private motorcade, breaking with White House tradition. Despite these moves, spokesperson Grisham tells Us reports that Melania is ashamed “are false, and I’d challenge the sources saying those things to do so on the record.”

For more insight into Melania’s decision to stay or go — including an analysis of her coldest public displays toward her husband — pick up the newest issue of Us Weekly, on stands now.