Free Samples! Have Top Health & Wellness Picks Shipped to You at No Cost
These Denim Joggers Are Our Secret to Cool, Casual Comfort
These Stunning Ruched One-Piece Swimsuits Show Just the Right Amount of Skin
END_OF_DOCUMENT_TOKEN_TO_BE_REPLACED

Called out. Leah McSweeney put her Real Housewives of New York City costar Ramona Singer on blast via social media over the weekend.

McSweeney, 37, shared a screenshot of Singer, 63, telling one of her Instagram followers that “all lives matter” on Sunday, May 31. The Married to the MOB designer added a facepalm emoji. 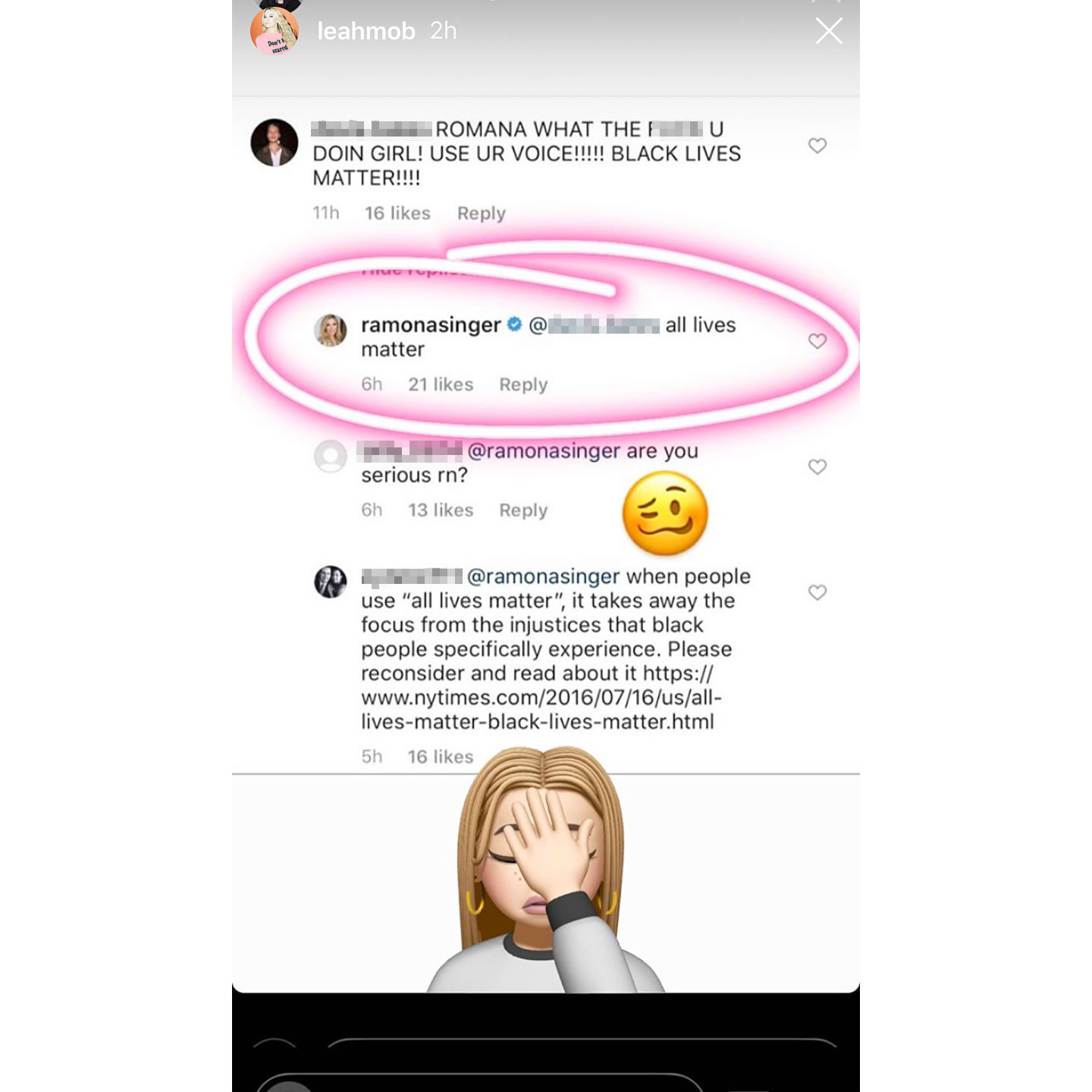 Singer has since turned off the comments section on her recent Instagram posts. The longtime Bravo star subsequently shared a link to a USA Today story with resources, including petitions and places to donate, as thousands of protestors across the country seek justice for George Floyd, who died on May 25 after police officer Derek Chauvin pressed a knee into his neck for more than eight minutes. Chauvin was later charged with third-degree murder and second-degree manslaughter.

“Please watch this moving video #blacklivesmatter #justiceforgeorgefloyd #enoughisenough,” Singer wrote on Sunday alongside a series of posts related to the Black Lives Matter movement. She then pointed out that she previously posted about Floyd: “(I shared this photo of George Floyd on my story several days ago).”

McSweeney, for her part, went live on Instagram from an NYC protest on Sunday night. The reality TV personality, who joined that cast of RHONY for season 12, which is currently airing, shared a series of social media posts from the protest as well.

Singer and McSweeney haven’t been seeing eye to eye on the Bravo series. After McSweeney, who was previously sober for nine years, admittedly had too much to drink during the May 28 episode of RHONY, Singer expressed her concerns. The Ageless by Ramona founder’s daughter, Avery, 25, did the same while watching the episode.

“This is next level horrible. i am cringing,” Avery said via her Instagram Stories, sharing clips of McSweeney from the episode. “This is nuts. I’m embarrassed for you. These people are crazy. How are you associated with them?”

McSweeney fired back at her costar’s daughter.

“@ramonasinger are you sure you wanna involve @averysinger in our drama? She’s 25 so she’s fair game to me. In fact I’m Closer in age to her then [sic] I am to You,” she wrote, telling Avery to “sit down sweetie.”

McSweeney also addressed her behavior, which has been dubbed “hurricane Leah,” before Thursday’s episode aired.

“I want to preface this episode by saying I went on this trip to Rhode Island not really wanting to even go. I didn’t know the women that well at this point, and I was in an already-vulnerable mood,” she wrote via Instagram. “I wanted my sister there for support. She was also six months postpartum and looking forward to her first baby-free overnight trip. Moms: haven’t we all been there? But enough about me. Tune in tonight for Ramona. Watch her get embarrassed by MY ‘bad’ behavior.”

Free Samples! Have Top Health & Wellness Picks Shipped to You at No Cost
These Denim Joggers Are Our Secret to Cool, Casual Comfort
These Stunning Ruched One-Piece Swimsuits Show Just the Right Amount of Skin
END_OF_DOCUMENT_TOKEN_TO_BE_REPLACED