Robin Wright is opening up about her former House of Cards costar Kevin Spacey. In a new interview with Net-a-Porter’s digital magazine, PorterEdit, the actress addressed the accusations of sexual misconduct made against Spacey, saying she believes everyone deserves a second chance.

Wright, 52, also said that she has not spoken to Spacey since he was fired from House of Cards in November after being accused by multiple people, including actor Anthony Rapp, of sexual misconduct. “He’ll reach out when he’s ready, I’m sure. I think that’s the way it should go,” the Texas native said. 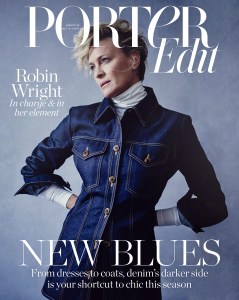 She explained that she believes everyone, including celebrities, has a right to a personal life.

“I feel sorry for anybody whose life is in the public arena. It’s a nightmare, can you imagine? We do a job, we share [a performance] with viewers. Why does our private life have to be public? I hate that part of this industry. It’s so invasive,” she shared. “I believe everyone’s personal life should be personal. Positive, negative, neutral, whatever – I don’t believe it should be anybody’s business. But I’m not talking about this [#MeToo] movement.”

Spacey has denied all claims made against him and was last spotted in November, seeking treatment in an Arizona sex rehab facility.

Wright took over as the lead for the sixth and final season of House of Cards, set to premiere on Netflix on Friday, November 2.