‘The Bachelorette’ Season 16: Everything We Know
These Denim Joggers Are Our Secret to Cool, Casual Comfort
These Stunning Ruched One-Piece Swimsuits Show Just the Right Amount of Skin
END_OF_DOCUMENT_TOKEN_TO_BE_REPLACED 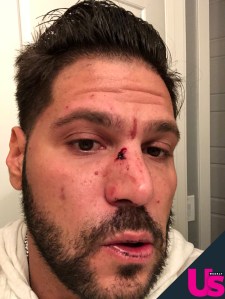 Ronnie Ortiz-Magro and Jen Harley Drama: Everything We Know

In Us Weekly’s exclusive photo of the Jersey Shore star, 33, his lip is split, his nose and forehead both have a gash and his nose is extremely swollen. He also has a bruise above his eyebrow.

Us confirmed on Thursday, January 3, that Ortiz-Magro filed a battery report against Harley, 31, after she allegedly threw a glass ashtray at him on New Year’s Eve. According to a source, the pair, who are parents of 9-month-old daughter Ariana, got into a fight at the Hustler Club in Las Vegas around 2 a.m. on Tuesday, January 1. 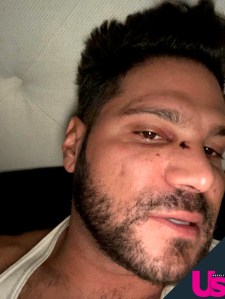 The source also noted that the duo were arguing about an ongoing issue at the time of the altercation. Us confirmed on Wednesday, January 2, that Ortiz-Magro and Harley called it quits following the New Year’s Eve outing.

“Ronnie and Jen got into a fight on New Year’s Eve. They broke up before New Year’s Eve, got back together right before then and got in a big fight on Monday night,” an insider told Us. “They’re currently broken up. But it’s the same story every time: They are together, they fight, they break up and then get back together.”

According to the insider, the twosome “fight a lot” and have a “very volatile relationship.”

Back in June, Harley was arrested for domestic battery in Las Vegas after dragging Ortiz-Magro with her car. The pair later reunited and celebrated a series of holidays as a family, including July 4, Halloween and Christmas.

If you or someone you know are experiencing domestic violence, please call the National Domestic Violence Hotline at 1-800-799-7233 for confidential support.

With reporting by Jennifer Peros

‘The Bachelorette’ Season 16: Everything We Know
These Denim Joggers Are Our Secret to Cool, Casual Comfort
These Stunning Ruched One-Piece Swimsuits Show Just the Right Amount of Skin
END_OF_DOCUMENT_TOKEN_TO_BE_REPLACED