When fans first met Nicole Richie in 2003, she was a party girl attempting to live The Simple Life. Now, she’s a decade in to what she calls “mom life,” and she reveals in the new issue of Us Weekly that nothing makes her happier than to “be in sweats” and “shut off,” with her husband Joel Madden, 39, daughter Harlow, 10, and son Sparrow, 9.

While her days of partying hard with BFF Paris Hilton are behind her, the Honey Minx designer hasn’t lost her famously sharp tongue. In one installment of her new shoppable Yahoo video series, Style Now/With, the 37-year-old shows off her holiday giftwrapping skills — and her rapping prowess as well. “I definitely think it’s going to be No. 1 on iTunes,” she quips. “I had to add some humor.”

Nicole Richie Tells Us What She Carries For 'Protection'

In the video above, the jokester spills more to Us about life with her greatest gifts of all: her family. 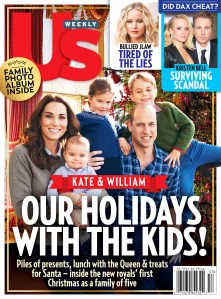 For even more on Nicole Richie, pick up the new issue of Us Weekly, on stands now.