Big Brother's Alyssa Snider and Kyle Capener Split
Jennifer Garner Has 'No Desire' to ‘Slow Things Down’ With Love John Miller
‘Seinfeld’ Cast: Where Are They Now?
END_OF_DOCUMENT_TOKEN_TO_BE_REPLACED

Nick Viall is chiming in! Ahead of The Bachelorette hometown dates episode, set to air on Monday, July 8, the former Bachelor star commented on Jed Wyatt’s sticky situation.

In a sneak peek of the upcoming episode, Wyatt’s mother tells Hannah Brown she has “no opinion” of her, which seems to upset the former pageant queen. Viall, who has appeared on two seasons of The Bachelorette, one season of Bachelor in Paradise and was the star of season 21 of The Bachelor, commented on Us Weekly’s Instagram post promoting the clip. 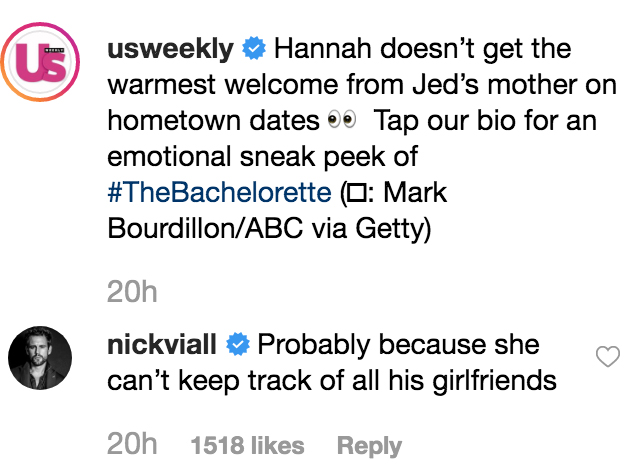 “Hannah doesn’t get the warmest welcome from Jed’s mother on hometown dates,” our caption read. Viall, 38, replied, “Probably because she can’t keep track of all his girlfriends.”

Wyatt’s ex-girlfriend Haley Stevens recently came forward, telling Us Weekly she was dating the Nashville singer for four months until he went on the show — only to further his career. She said the two were in a serious relationship and she believed they’d be together when he returned.

In the beginning of the season, Wyatt, 25, admitted to Brown that he did originally come on for the platform — but was actually forming real feelings for her. Brown, in turn, appreciated the honesty.

“He basically tried to sell himself as an honest person by admitting he wasn’t being honest, but he was still telling a lie while he was doing it, which makes it worst. It’s like a half truth,” Viall said on the latest episode of his “Viall Files” podcast. “I believe her. … Any normal person, if they were dating someone and they go on the show and come back, you would be pissed. You’d be hurt. … I’m very defensive of this girl. She’s been manipulated by Jed and now she’s kind of out to get him, which I get.”

Viall also pointed out that while Wyatt, the frontrunner on the season, isn’t allowed to do interviews while still on the show, he could have called out his ex for lying on Instagram Stories. He did explain his “platform” confession on Instagram Stories on June 10.

“Hannah said she wanted us to be open and honest and I didn’t want to go another day without her knowing the truth,” Wyatt wrote at the time. “I knew some people would take it the wrong way but what mattered to me was being honest so we could focus on our relationship.”

The Bachelorette airs on ABC Mondays at 8 p.m. ET.

Big Brother's Alyssa Snider and Kyle Capener Split
Jennifer Garner Has 'No Desire' to ‘Slow Things Down’ With Love John Miller
‘Seinfeld’ Cast: Where Are They Now?
END_OF_DOCUMENT_TOKEN_TO_BE_REPLACED