Time makes all the difference — just ask Brad Pitt. The Oscar nominee was in a dark place after he went through a messy divorce from longtime love Angelina Jolie that included a nasty custody battle over their six children: Maddox, Pax, Shiloh, Zahara, Vivienne and Knox.

Everything We Know About Brad Pitt, Angelina Jolie’s Custody Battle

Now, almost three years after the couple called it quits, Pitt, 55, is focused on being a good father to the children he shares with Jolie, 44.

“They do simple things like cook or watch movies,” a source reveals in the new issue of Us Weekly of Pitt’s relationship with his kids.

“He encourages them to pursue their hobbies,” the source adds. “They love to hang out and talk. Brad talks to them about whatever is on their minds — he’s a great listener.” 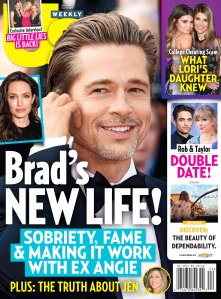 The Once Upon a Time… In Hollywood actor, who attends therapy, is also relieved that coparenting is going well.

“He’s grateful that all the animosity is in the past,” the source shares. “[The kids] come first. That’s what he’s most excited about — being a dad and sharing his life with his children.”

For more details on Pitt’s post-divorce life, watch the video above and pick up the new issue of Us Weekly, on newsstands now!