A true blue friend. Courteney Cox had some kind words to share after her BFF Jennifer Aniston’s dog with estranged husband Justin Theroux, Dolly, passed away.

The LEGO Ninjago actor, 47, announced that his fur baby with the Friends alum, 50, had crossed over the rainbow bridge in an Instagram post on Sunday, July 28. “Tonight, at sunset, after a heroic struggle … our most loyal family member and protector, Dolly A. laid down her sword and shield,” he captioned a gallery of photos of the late pup.

He continued to say that she was “surrounded by her entire family,” which fans believe included Aniston, as one of the photos showed him holding hands with a woman believed to be the actress.

Theroux closed with a quote from 19th century politician George Vest, writing, “The one that never deserts, the one that never proves ungrateful… is the dog— faithful and true, even in death. … Rest In Peace Dolly.”

Aniston’s BFF Cox, 55, commented on the post one day later. “We love you dolly,” the Cougar Town alum wrote.

She wasn’t alone in her well wishes: Orlando Bloom also chimed in, writing, “Rip beauty,” as did model Martha Hunt, who wrote, “Sending you love.”

The Murder Mystery actress had previously talked about the pup, who was named after Dolly Parton, during an appearance on Jimmy Kimmel Live! in December.

Aniston noted that Dolly’s namesake had been a bit put off by the name. “I guess I slightly offended her,” she joked of Parton, 73. 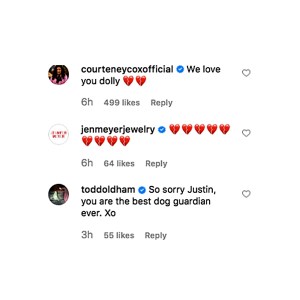 The country singer told The Talk later that month that though being in the same room with the canine Dolly was “embarrassing, kinda, because there were several people there, and I’d hear [Jennifer] say, ‘Dolly, don’t pee on the couch! Don’t be knocking the water bowl over,’” she actually found the whole thing “cute.”

Aniston and Theroux parted ways in February 2018. They gave a statement to Us Weekly at the time: “We are two best friends who have decided to part ways as a couple, but look forward to continuing our cherished friendship. Above all, we are determined to maintain the deep respect and love that we have for one another.”