Jennifer Aniston wasn’t about to let a little rain get her down. While filming the new Netflix movie Murder Mystery in Montreal on June 27, not even a constant downpour could dampen her mood. “She was very upbeat when they started shooting,” says a set source in the new issue of Us Weekly. “In fact, Jen seems happy every time she’s on the set.” Her merry attitude has been infectious, notes the source, keeping her costars, including Adam Sandler, and the crew in high spirits: “The vibe here is great.”

These days, the Friends alum, 49, has every reason to smile. Nearly five months after she and Justin Theroux announced their plans to call it quits on their two-and-a half-year marriage, Aniston is dating again — and, insiders reveal, she’s being wooed by two men! “It’s very hush-hush,” says a confidant, adding that neither is an actor. The first contender, says another source, is a tech titan introduced to Aniston by a close friend. “He recently split from his wife and is trying to win over Jen,” confides the source.

The second, says another confidant, “is an industry creative she met when they started working on a project together several months ago.” The fact that neither is Aniston’s usual type only adds to the allure for the actress — and her tight-knit circle of girlfriends. “Jen’s group is excited that she’s dating again,” says an Aniston insider. “They can hardly keep it a secret when they’re so happy to see Jen moving on.”

The remarkable resilience Aniston has shown this time around is a far cry from the devastation she went through after Brad Pitt blindsided her with their 2005 divorce. In fact, her healthy attitude has allowed both her and her friends to have fun with the tabloid rumor (which Us previously debunked) that Aniston is dating Pitt again.

As Portia de Rossi told Us at a West Hollywood event June 27, “I was at a newsstand… and there was a cover of Brad and Jen!” She jokingly alerted her wife, Ellen DeGeneres. Continues de Rossi, “I actually took a picture of it and sent it to Ellen and said, ‘Can you believe this!’“

Though Aniston is in a positive headspace, she’s still stepping into the dating pool with caution. “As strong as Jen is, she tends to be very wary of new people,” says the friend. “It normally takes a while for her to open up and trust someone.” 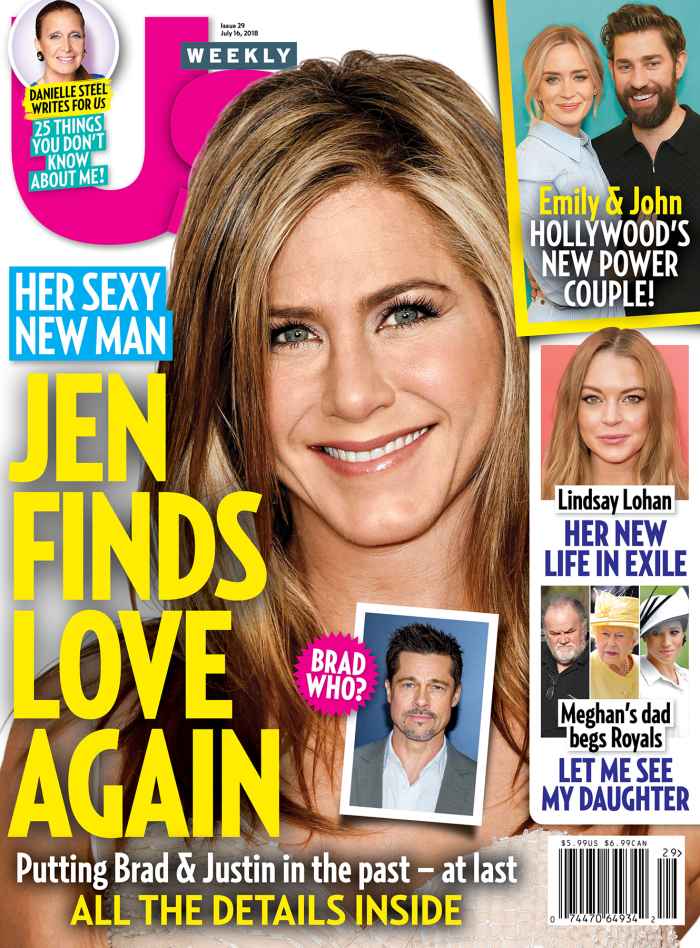 For more on Aniston’s single life, pick up the new issue of Us Weekly, on stands now.

For the latest TV news and interviews, subscribe to our new podcast “Watch With Us” below