Justin Bieber’s mom, Pattie Mallette, had a lot to say about the singer’s April Fools’ Day prank in which he jokingly announced his wife, Hailey Baldwin, is pregnant.

A Timeline of Justin Bieber and Hailey Baldwin’s Relationship

“Ya well it better be,” the Nowhere but Up author, 44, wrote in the comments section of her son’s post that showed a puppy Photoshopped into a sonogram picture, revealing he was just kidding. “Ha ha. Happy #AprilFools,” she added with an eye-rolling emoji. “I’m always on guard and ready for you today.”

Mallette continued: “I am SO looking forward to the day y’all bringing me babies that are ‘GRAND’! You’re going to make BEAUTIFUL children and be GREAT parents when the time comes!! Maybe just don’t call me Grandma. Or Nana. Or Nanny. Or… OKAY I DON’T KNOW IF I’M READY!” 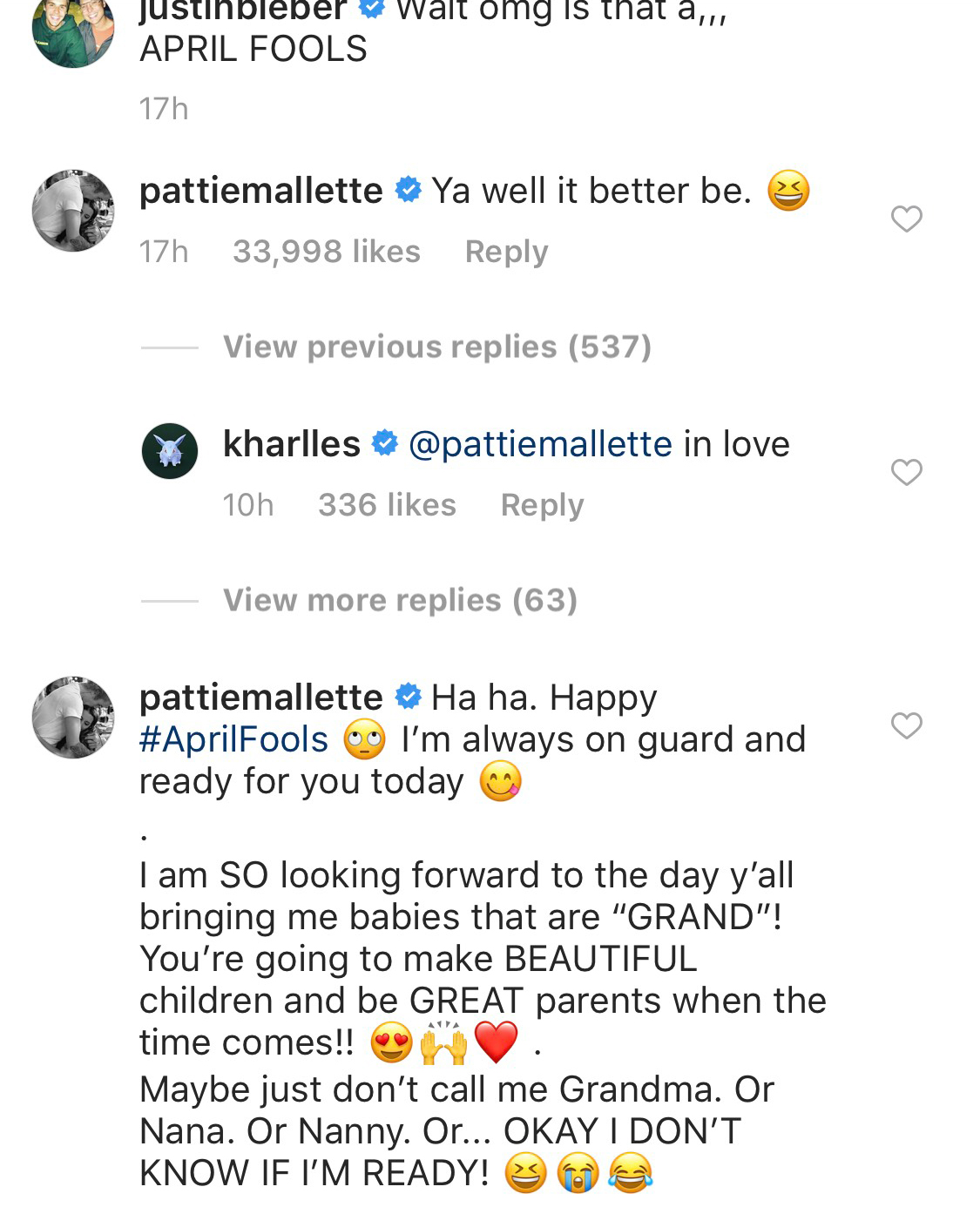 The proud mama’s reaction was a lot calmer than most in Bieber’s comments section, which included mixed feelings on his staged photos of the 22-year-old model at a doctor’s office showing off her bare stomach. Many followers were upset with the “Sorry” crooner for his controversial post, pointing out that millions of women struggle with infertility.

“Is anyone else upset about this? I’ve always been a JB fan, but children are not jokes… losing a child, is NOT a joke. Educate yourself and grow up,” one fan wrote of the insensitive joke. Another added: “Not something you joke about, when there women out there trying to get pregnant and they can’t. And you think it’s okay to joke about it!”

Celebrities Fight Back on Social Media

Last month, Bieber and Baldwin — who wed in a New York City courthouse in September 2018 — sparked speculation they are expecting their first child when the Canada native hinted at potential fatherhood when he announced he wouldn’t be going back on tour.

“I’ve toured my whole teenage life, and early 20s, I realized and as you guys probably saw I was unhappy last tour and I don’t deserve that and you don’t deserve that. You pay money to come and have a lively energetic fun light concert and I was unable emotionally to give you that near the end of the tour,” he wrote. “I have been looking, seeking, trial and error as most of us do, I am now very focused on repairing some of the deep rooted issues that I have as most of us have, so that I don’t fall apart, so that I can sustain my marriage and be the father I want to be. Music is very important to me but Nothing comes before my family and my health.”

A source told Us Weekly in January that “Hailey can’t wait to be a mom” and that the pair “are excited about the next chapter of their lives together.”