Though she and Evan Felker, both 34, have been seeing each other since February, their romance first ignited while she was still with then-boyfriend Anderson East. At the time, the Turnpike Troubadours frontman had also just initiated divorce proceedings from his now-estranged wife, Staci.

“Miranda knew Evan was married but that didn’t stop either of them,” an insider reveals in the new issue of Us Weekly. “She isn’t remorseful.” In fact, she insists on her innocence. According to a confidant, “Miranda didn’t steal Evan from his wife.”

But it’s undeniable that her latest relationship mimics past loves. Just months after her 2015 split from her husband of four years, Blake Shelton, Lambert had already moved on with East, 29. (Fueling rumors that infidelity caused their shocking breakup, in 2016 Shelton released “She’s Got a Way With Words,” which takes aim at a philandering ex.)

And before she burned Shelton, 41, Lambert had broken the heart of then-love Jeff Allen — who called out her wandering eye in an April 26 tweet.

“It seems like this is a pattern for her,” explains a second source — one others have picked up on too. Echoes the first insider, “Miranda has a problem staying faithful to anyone.”

Lambert’s romantic tendencies are starting to backfire on her, however. An open book, the two-time Grammy winner has often been praised for folding her real-life drama into her music. Case in point: While accepting her ACM award for Best Song on April 15, she applauded her fans for sticking by her through misery, saying in her speech, “Thank you guys so much for sharing my broken heart with me.” (Shelton and girlfriend Gwen Stefani were also in attendance at the event.)

Though the public once sided with her, the tide seems to be turning. After news broke of her dalliance with Felker, social media users began leaving scathing comments on her posts, demanding she “stay away from people’s husbands,” and “woman up and respect others and yourself.”

Now her friends fear the vitriol could take a toll on her. “Miranda is insecure and has too many ‘yes’ people in her life,” reveals a source. “She does this to herself. The people around her don’t feel bad anymore.” 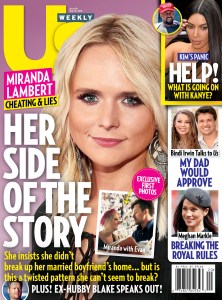 For more on Lambert and Felker’s relationship, pick up the new issue of Us Weekly, on newsstands now!