The Bra Lady Gaga Loves With Nearly 3,000 Reviews
Shoppers Say This Is the Softest Cardigan You’ll Ever Own
77.9% of Users Sustained Weight Loss Over 9 Months Using This Program
END_OF_DOCUMENT_TOKEN_TO_BE_REPLACED

Introducing … John Miller! Us Weekly exclusively revealed that Jennifer Garner is dating the 40-year-old businessman after her divorce from Ben Affleck.

Celebrity Couples and How They First Met

“They’ve been together for six months,” a source says in the new issue of Us. “It’s getting serious.”

Watch the video above for five things to know about Miller!

Jennifer Garner and Ben Affleck’s Divorce: Everything We Know

1. He Runs a Business
Miller is the CEO and chairman of Cali Group, a tech company that owns Miso Robotics and a chain of 50 CaliBurger restaurants. The burger chain is known for its use of a so-called “Flippy” tool, which performs cooking tasks that are typically manual labor, such as flipping burgers on a grill.

2. He Has Met Garner’s Children
A source tells Us that the Alias alum, 46, introduced Miller to her daughters, Violet, 12, and Seraphina, 9, and her son, Samuel, 6. He has a 12-year-old son and a 9-year-old daughter with his estranged wife, Caroline Campbell.

3. He Is Still Legally Married
Miller and concert violinistCampbell split in 2014 after nine years of marriage, but they have yet to finalize their divorce. A source tells Us that the estranged couple are waiting for a judge to sign off on the paperwork. Garner likely understands as her divorce from Affleck, 46, was not finalized until earlier this month, more than three years after they called it quits.

Check out the video above for the rest about Miller! 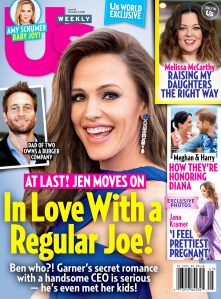 For more on Garner and Miller’s romance, pick up the new issue of Us Weekly, on stands now!

With reporting by Jennifer Peros and Jen Heger

For the biggest celebrity news stories of the day, controversies, crime, and other hot topics listen to our new podcast ‘All Rise’ below!

The Bra Lady Gaga Loves With Nearly 3,000 Reviews
Shoppers Say This Is the Softest Cardigan You’ll Ever Own
77.9% of Users Sustained Weight Loss Over 9 Months Using This Program
END_OF_DOCUMENT_TOKEN_TO_BE_REPLACED