Colton Underwood has given Bachelor Nation and fans everywhere another reason to love him: his commitment to raising awareness of mental health.

The Bachelor star took to Twitter on Monday, February 25, to share his thoughts on therapy: “On a serious note, I see a therapist regularly. This doesn’t make me crazy or delusional… it actually makes me sane. Mental health is HEALTH.” 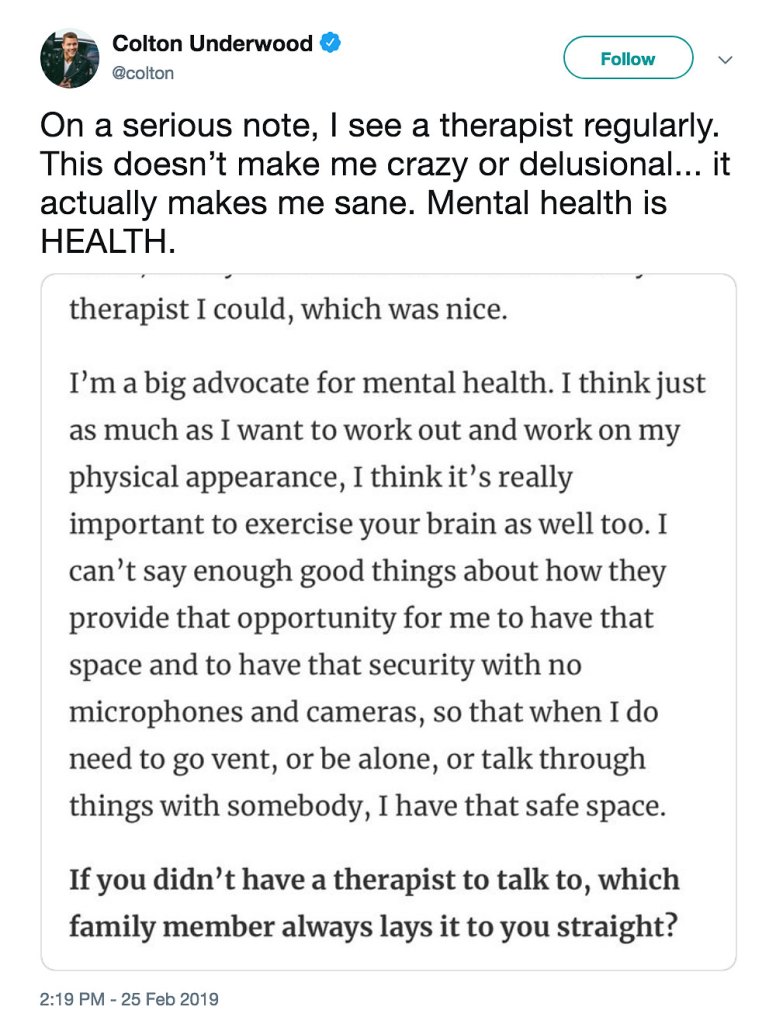 The 27-year-old former football player then attached a screenshot of a part of an interview he did with TV Insider. In the screen grab, the publication asked if he could reach out to family or friends to advise him when he was filming. Underwood responded, “No. They actually provide a therapist on the show, so any time I wanted to meet with my therapist I could, which was nice.”

He went on to praise the ABC show for offering the service. “I’m a big advocate for mental health,” he continued in the attached interview. “I think just as much as I want to work out and work on my physical appearance, I think it’s really important to exercise your brain as well too. I can’t say enough good things about how they provide that opportunity for me to have that space and to have that security with no microphones and cameras, so that when I do need to go vent, or be alone, or talk through things with somebody, I have that safe space.”

Underwood had previously spoken about his mental health last July, revealing the insecurities he felt about being a virgin on the Men Tell All taping for Becca Kufrin’s Bachelorette season. After the show aired, he wrote a lengthy caption on an Instagram photo. “For years I hid my feelings, including depression & anxiety,” he wrote in part. “You see a portion of my life and a select few scenes that help portray a picture of who I am. I’m here to tell you that I am not perfect and that it’s okay to not be okay sometimes.”

Stars With Anxiety: Celebs Open Up About Their Struggles and the Methods That Help

The reality star — who was previously in a long-term relationship with gold medal Olympic gymnast Aly Raisman — received praise for his sensitivity earlier in the season when contestant Caelynn Miller-Keyes revealed that she had been sexually assaulted in college. While comforting her, Underwood shared that he had “been on the other side of it,” sharing that his “first love” was sexually abused. (While he didn’t name her, Raisman testified against former doctor Larry Nassar, who was sentenced in 2018 to 175 years in prison for multiple counts of sexual assault.)

As for family members that he talks to when he needs guidance for his own life, Underwood told TV Insider that he is close with his mother and can lean on his dad for advice too. “But my go-to member in my family to vent to,” he revealed, “is my dog, Sniper.”

The Bachelor airs on ABC Mondays at 8 p.m. ET.