Pleasantly surprised! Colton Underwood opened up about his relationship with Cassie Randolph on Thursday, October 10, admitting he was unsure about where their romance would end up.

Everything Colton and Cassie Have Said About When They'll Get Married

After a fan commented on a photo of the pair, “I never saw you too [sic] lasting I am just sayin,” Underwood was quick to reply. “Same. It’s crazy what happens when you take your time and don’t feel pressure from a show or public,” the former NFL star, 27, wrote. 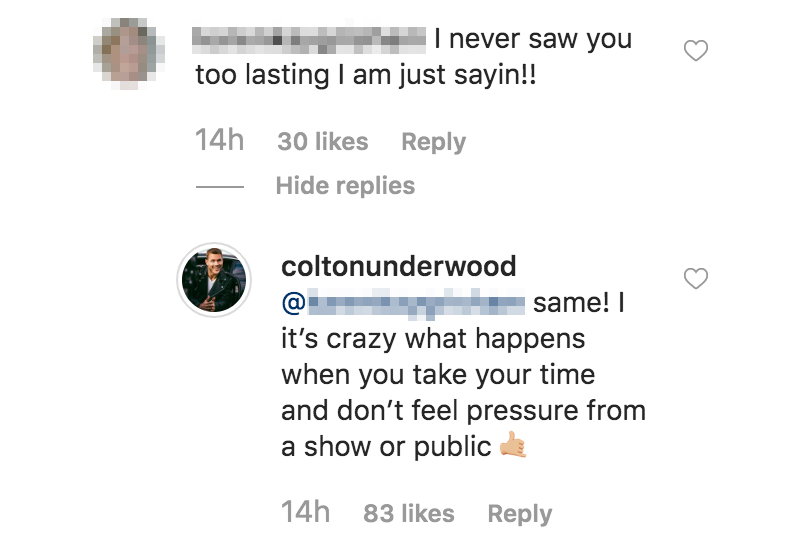 Another follower was surprised by his comment, following up with, “You didn’t see the 2 of you lasting?” He then answered, writing, “No not at all.”

Inside Cassie and Colton's Lovey-Dovey Vacation

Randolph, 24, met the Bachelor in Paradise alum during season 23 of The Bachelor. After she decided to go home, he went after her and convinced her to give him a chance. However, they didn’t follow the show’s tradition and get engaged. Instead, they chose to continue dating and get to know each other more, which led to fans constantly asking about their engagement plans. 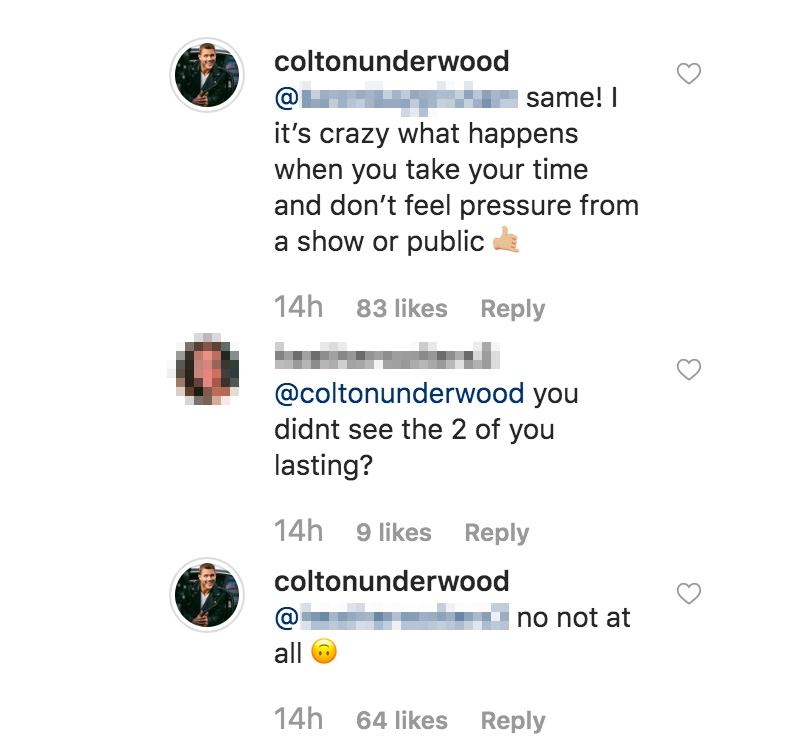 “Me and him are 100 percent on the same page,” the speech therapist told Us last month. “So, when you hear things out there, when people are saying, ‘They’re not on the same page.’ I’m like, ‘You’re not in this relationship!’ We actually are. We’re really good. We’re in a good spot.”

In fact, ever since The Bachelor ended, the pair have been enjoying getting to know each other and growing as a couple.

“We’re like, we just need to be normal for a bit and enjoy,” she continued. “We have nights where we just come back and hang out with my cats and just watch TV and cook dinner. I’m like, ‘These are my favorite nights. We need to have more of these.’ It’s what we’re getting back into right now.”

In May, the duo revealed to Us that they “don’t have a timeline” when it comes to taking the next steps in their relationship.

“[We] don’t want to rush something that’s going to last forever,” Underwood said at the time. “We want to build such a strong foundation for ourselves to use to sort of launch us for the rest of our lives, and that’s what we’re doing.”