Oh, Baby! Meghan Trainor Is Pregnant, Expecting 2nd Child With Daryl Sabara
21 Zara-Style Winter Fashion Finds — All Under $40
Pedro Pascal Through the Years: From 'Game of Thrones' to 'The Last of Us'
END_OF_DOCUMENT_TOKEN_TO_BE_REPLACED

In early 2012, singer Aubrey O’Day answered the phone to hear Vanessa Trump — the wife of Donald Trump Jr., with whom she’d recently filmed Celebrity Apprentice — on the other end. After finding a treasure trove of emails, Vanessa had just learned O’Day and her husband had been having a months-long affair and she was ready to confront the other woman — with the help of a heart-wrenching ploy: “She called Aubrey with her kids on the phone,” a source says in the new issue of Us Weekly. Vanessa’s intent was to shame O’Day away from her husband — and she didn’t intend to back down. Says another insider, “Vanessa went crazy and was super jealous.”

Since the March 15 announcement that Trump Jr. and his wife, both 40, were divorcing, multiple sources confirmed to Us that their marriage was torn apart by far more than the pressures of being part of a presidential family. As Us Weekly reported, for six long years, Trump Jr. and Vanessa had held on to the shocking secret that he had had an affair with O’Day, lasting from the end of 2011 into March of the next year.

And the romance was very intense. “When it started, he and Aubrey were very serious all of a sudden,” says an O’Day insider. “He told her it was over with his wife, that they were separated and he didn’t love her — all of that stuff.” O’Day, now 34, believed him. “Aubrey fell for him hard,” adds the insider. “She thought they were going to be together for real.”

Vanessa and Donald Trump Jr. Through the Years: A Timeline of Their Relationship

Back then, O’Day, a former member of the reality-TV girl band Danity Kane, had just finished competing on season 5 of the celebrity version of the Trump family’s NBC hit. “Things started up with Aubrey and Don Jr. toward the end of the taping,” the source says. At the time that Vanessa confronted O’Day, she and Trump Jr. shared daughter Kai, now 10, and sons Donald Trump III, 9, and Tristan, 6; they later welcomed Spencer, 5, and Chloe, 3.

Sources also confirmed to Us that Trump Jr. was smitten by O’Day. “Don wanted to leave Vanessa for Aubrey, and told her he would. He fell in love with her,” says a confidant.

But forces even larger than Vanessa, a woman scorned, came between them. Trump Jr.’s family — including now-President Donald Trump — told his eldest son to come to his senses. Says the confidant, “They pressured him to end it with Aubrey.” 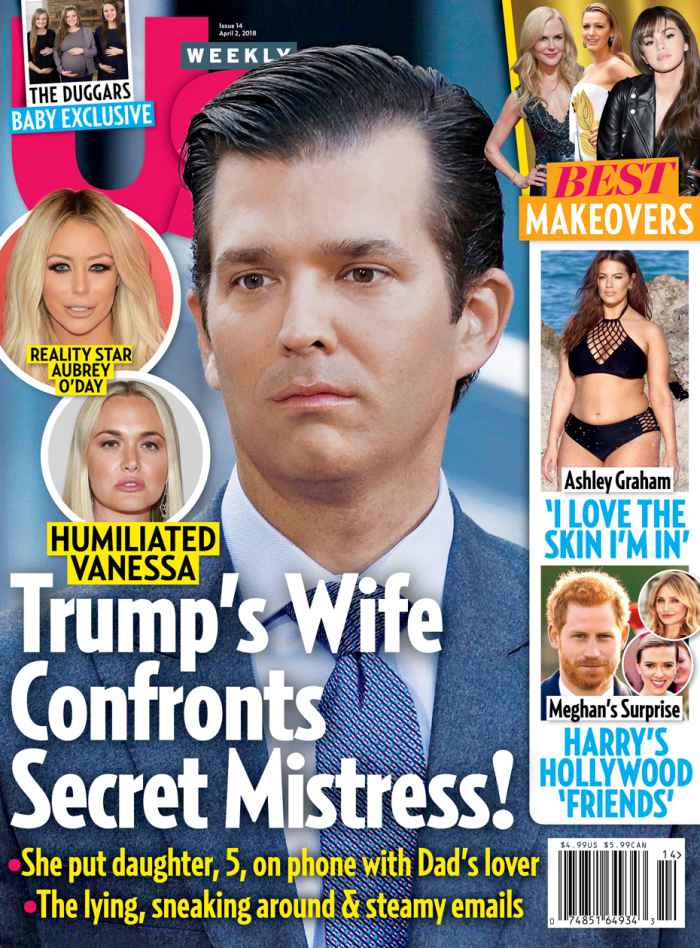 For more about the Trumps’ shocking secrets — including more details of Trump Jr.’s affair with O’Day — pick up the new issue of Us Weekly, on stands now.

Oh, Baby! Meghan Trainor Is Pregnant, Expecting 2nd Child With Daryl Sabara
21 Zara-Style Winter Fashion Finds — All Under $40
Pedro Pascal Through the Years: From 'Game of Thrones' to 'The Last of Us'
END_OF_DOCUMENT_TOKEN_TO_BE_REPLACED