Free Samples! Have Top Health & Wellness Picks Shipped to You at No Cost
These Denim Joggers Are Our Secret to Cool, Casual Comfort
These Stunning Ruched One-Piece Swimsuits Show Just the Right Amount of Skin
END_OF_DOCUMENT_TOKEN_TO_BE_REPLACED

William H. Macy “is heartbroken” after his wife, Felicity Huffman, was arrested for her alleged role in the nationwide college admissions scam, a source reveals exclusively in the new issue of Us Weekly. “He’s been in tears.”

The 69-year-old Shameless star and the Desperate Housewives alum, who have been married for more than two decades, are parents of daughters Sophia, 18, and Georgia, 16. Huffman, 56, has been accused of of making a charitable donation of $15,000 “to participate in the college entrance exam cheating scheme on behalf of her eldest daughter,” according to court documents.

Huffman was arrested and charged with conspiracy to commit mail fraud and honest services mail fraud on March 12. She was released on a $250,000 bond later that day.

A second source close to Huffman says in the new issue of Us that Macy is devastated by the scandal. “Felicity is crushed, and her husband is heartbroken,” the second source explains.

Fellow actress Lori Loughlin and husband Mossimo Giannulli, who share daughters Bella, 20, and Olivia Jade, 19, were also arrested for their alleged role in the scam. The couple allegedly “agreed to pay bribes totaling $500,000 in exchange for having their two daughters designated as recruits to the USC crew team — despite the fact that they did not participate in crew — thereby facilitating their admission to USC,” per court documents.

“They were caught red-handed in this FBI sting, but they’re both trying to justify it as something any parent would do for their child,” the Huffman source explains about the celebrity parents. “They’re loving moms who allegedly broke the law by cheating the system, so now they could be considered criminals.” 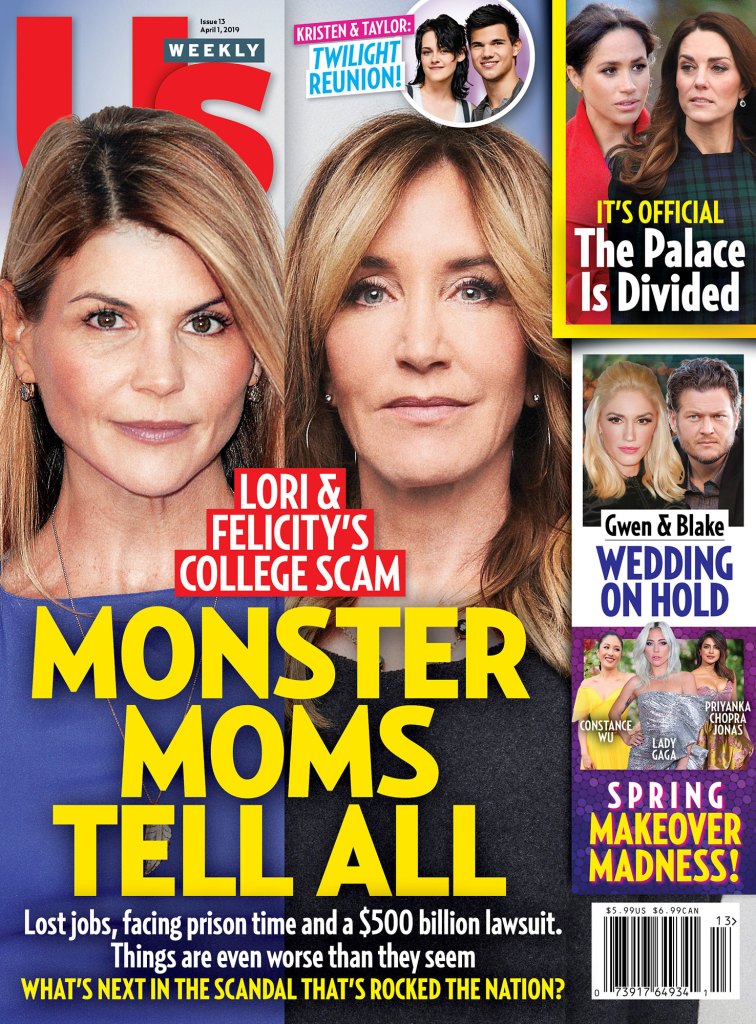 The source adds that “neither actress knew this would become so serious.”

“They haven’t fully grasped the extent of their alleged crimes,” the source says. “Or the possibility of prison time.”

For more on the college admissions scandal, watch the video above and pick up the new issue of Us Weekly, on newsstands now!

Free Samples! Have Top Health & Wellness Picks Shipped to You at No Cost
These Denim Joggers Are Our Secret to Cool, Casual Comfort
These Stunning Ruched One-Piece Swimsuits Show Just the Right Amount of Skin
END_OF_DOCUMENT_TOKEN_TO_BE_REPLACED