The LadyGang has always been unfiltered, but in their new book, Becca Tobin, Keltie Knight and Jac Vanek will likely surprise even their most dedicated podcast listeners.

Books Stars Are Reading Amid Quarantine

“We have different chapters about dating and marriage and divorce and friendship. It’s kind of everything that women go through,” Vanek, 33, said on Us Weekly’s “Hot Hollywood” podcast while promoting Act Like a Lady, out now. “But if you’re, you know, married and you don’t really care to read about our rules on dating, you can just jump around to the book, however you see fit. It’s not one single story with one story lines you kind of can read and decide what you’re feeling and each story has its own beginning middle and end.”

The book features chapters written by Tobin, 34, Knight, 38, and Vanek, and essays written in their collective voice, the LadyGang, which started in 2015 when they launched their podcast.

“If you’re a fan of the podcast, then there are some Easter eggs in the book. … And maybe stories you’ve heard [just] a piece about before,” Knight explained. “If you’ve never heard of us before in your life, and you do not even know where the podcast app is on your phone, I think that there are still such awesome relatable stories.”

For Knight, specifically, the book dives into her first marriage. The Entertainment Tonight correspondent, who married her second husband, Chris Knight, in 2013, rarely speaks about her former spouse publicly.

“This is a story that I have really never told anyone,” the journalist told Us. “I felt so much shame about it because I was kind of a bad person in it. Like, I think sometimes it’s easier to be like, ‘This person did me wrong, this person did me wrong,’ but when you’re the person that maybe is to blame, you don’t bring it up.”

‘Glee’ Cast: Where Are They Now?

Tobin, meanwhile, gets real in the book about coping with the death of her former boyfriend. Vanek, for her part, wrote a lot her struggles with body image. 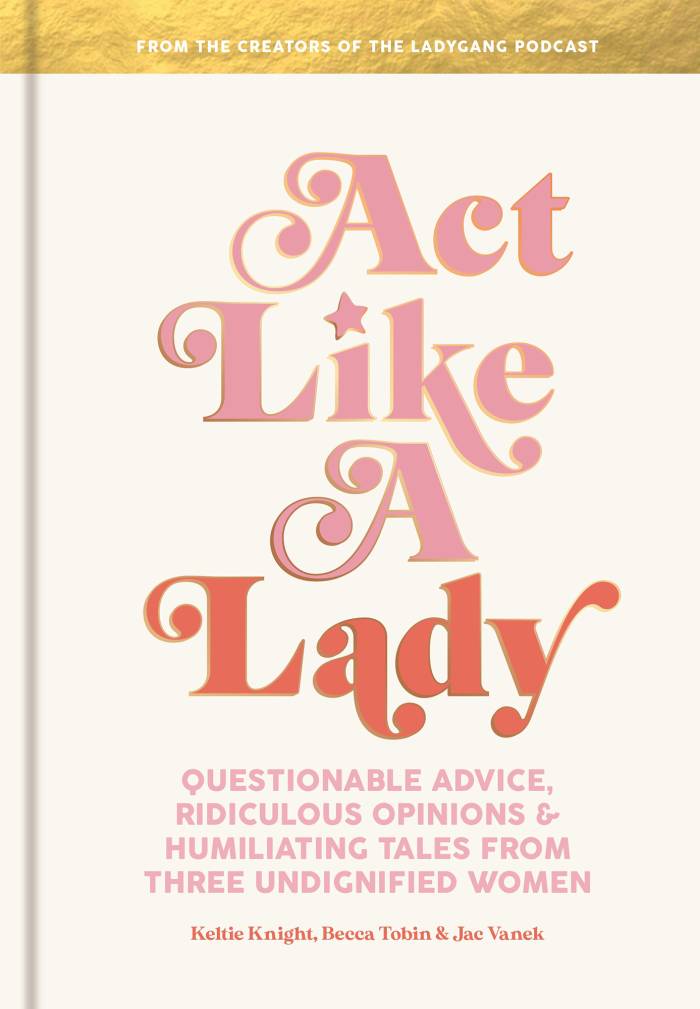 “We all kind of wrote what we think felt was right,” Vanek noted to Us. “And what we wanted to tell a story about and what we think that other girls could relate to. But it never was like, ‘Hey, we need this book to have like a lot of heart and like, let’s talk about dark stuff.’ … It’s also balanced with a lot of hooking up with guys.”

The three women also made a point to spill plastic surgery secrets in the book.

Stars Who’ve Hit Back Against Body-Shamers

“We’re no strangers to a good syringe and Keltie even a scalpel,” the Glee alum quipped to Us. “And let’s be honest, I don’t know if there’s a woman on TV who hasn’t touched her face. And so, it’s such a disservice to girls out there who are seeing these pictures and watching these TV shows, and they’re thinking, if only I looked like that, you know, my life would be so different. And it’s like, ‘Girl, you can look like that.’ And here’s how, it’s just a kind of expensive!”

For more from the LadyGang — and for a breakdown of the biggest news stories of the week — listen to Us Weekly’s “Hot Hollywood” podcast.

Kardashian Couple Check! Where Do Kourtney and Scott Stand Today?
Kourtney Kardashian and Scott Disick may be fueling reconciliation speculation, but sometimes a flannel shirt is just a flannel shirt. Mason Disick Through the Years Read article As exclusively revealed...
Flip podcast card

How Rob Kardashian Got Back to a ‘Good Place’ Mentally and Physically
Rob Kardashian has been “taking really good care of himself,” a source exclusively tells Us Weekly. Rob Kardashian Through the Years Read article As first revealed on our “Hot Hollywood” podcast,...
Flip podcast card

Monyetta Shaw Gushes Over Fiance Heath, Talks Coparenting With Ex Ne-Yo
Finding love after her split from Ne-Yo didn’t happen overnight for Monyetta Shaw, but now the Atlanta Exes star is happier than ever — and ready to talk about her fiancé, Heath, publicly for the first time. Celebrity...
Flip podcast card