Candace Cameron Bure was a child star of the ‘80s and ‘90s, which means she’s got a lot of killer, slightly dated, fun fashion to take a look back at.

The Full House star stopped by the Us Weekly offices to comb through some of her most memorable looks that feature lots of large curls, scrunchie socks and oversized blazers. And honestly, a lot of it is in style again.

“Oh, you’re killing me with this one,” she said when discussing the look she was most embarrassed about. “This hurts. Please don’t show this to the public.” 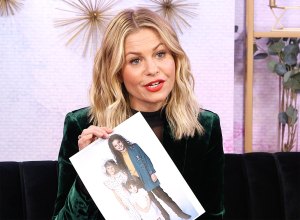 The outfit she’s referring to is a night-out look she wore to an NBC party back in 1997, which featured a halter top, a miniskirt, white block heel sandals and an ultra-tiny Louis Vuitton bag.

“This top and skirt is probably a size or two too small for me, I’m just stuffed into it, and someone should have told me. I think that I was probably 18 and I think I was trying to be sexy at 18 and that’s how it turned out.”

However, it wasn’t all bad. She also revealed that she still has the bag and her daughter recently stole it from her.

In fact, there were plenty of cool retro looks that she admired her younger self for wearing. This included an ensemble from 1993 made up of denim overalls, big hoop earrings and a waffle tee. “Some things never change because I think I just wore this last weekend,” she joked.

She also loved one of her mom’s looks, pointing out that it was in style now. “This is pretty much what I’m wearing all the time. It’s the big oversize blazer, a button-down, and jeans — it’s so fashionable right now. Even her earrings. You go, mom!”

For more insights into her past fashion choices, watch our video interview!