Keeping it cordial. Jessie J and Channing Tatum won’t let their split get in the way of their love for each other as friends.

The 31-year-old British singer left a supportive comment on Tatum’s Instagram post promoting the upcoming Magic Mike live tour in Australia, two weeks before Us Weekly exclusively confirmed that the couple had called it quits. The Step Up star, 39, appeared in a photo surrounded by the cast of male dancers — and even showed off a few of his moves with the crew in a quick video.

“I wanted it to cut to you doing Pony by the Sydney Opera House so bad Chan … 😞,” the “Domino” songstress wrote, referencing her ex’s infamous Magic Mike scene. 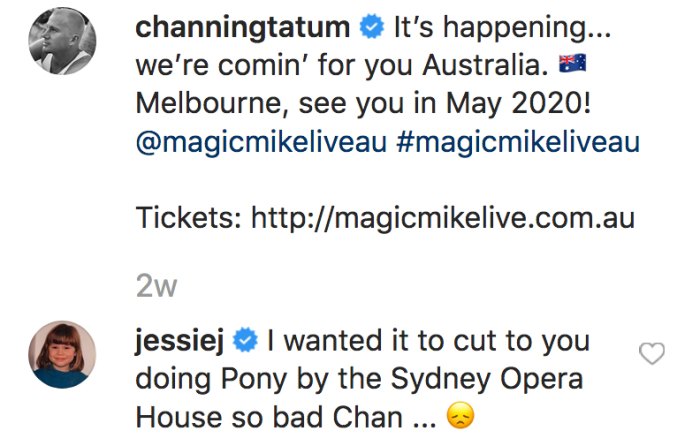 Couples Who Fell in Love on Set

A source confirmed to Us exclusively on Thursday, December 19, that the “Bang Bang” singer and Tatum had split after more than one year of dating.

“Channing Tatum and Jessie J broke up about a month ago,” the insider revealed. “They are still really close and still good friends.”

In October 2018, Us broke the news that the former The Voice UK mentor and Tatum had been quietly seeing each other for a few months following the 21 Jump Street star’s separation from his ex-wife, Jenna Dewan. The Step Up costars fell head over heels for each other on the set of the 2006 dance film and tied the knot three years later. The exes share daughter Everly, now 6.

Tatum and the Soundtrack star, 39, confirmed their split in April 2018 and filed for divorce the following October. One year after their separation, Dewan revealed in her memoir, Gracefully You: How to Live Your Best Life Every Day, that she felt “blindsided” by her ex’s new relationship. The World of Dance host, for her part, has since moved on with Tony-winning actor Steve Kazee and they are expecting their first child together.

After keeping things low-key at first, the She’s the Man star and Jessie J weren’t afraid to get flirty on social media as their relationship continued. In May, Tatum shared a revealing snapshot of himself posing nude in the shower after losing a bet to the “Price Tag” singer.

“I lost a game of Jenna to Jessica Cornish,” the Dear John actor wrote on Instagram, using her full name at the time. “The loser (me) had to post a picture the other person (Jessica Cornish) picked … Smh and fml … I’m never playing Jenga with her ever again.”