Matt Damon hasn’t given up on his best friend. The actor “continues to be a huge support” for Ben Affleck on his road to recovery, an insider reveals in the new issue of Us Weekly.

“He’ll always be there for Ben whenever he needs him,” the insider adds of the pals, who have been close since childhood and famously won an Oscar for their 1997 film Good Will Hunting.

Us confirmed on August 22 that Affleck, 46, checked back into rehab after an intervention with his estranged wife, Jennifer Garner, and a sober coach. An insider told Us at the time that Affleck “got to a point where he wanted help and knew he needed help.”

Jennifer Garner and Ben Affleck’s Divorce: Everything We Know So Far

The Gone Girl actor was spotted back home on Wednesday, September 5, but a source confirmed to Us that Affleck is still in treatment. “He works out at his gym for a few hours a day,” the source explained. “He is always accompanied by his coach and therapist.”

Affleck sought treatment for his substance abuse struggles for the first time in 2001. He checked into rehab for the second time in 2017. The Batman star previously opened up about how important it is to have support from Damon and his brother, Casey Affleck.

“I can’t tell you how valuable it is to have somebody who’s been through things with you, ups and downs, who knows what your life experience is like, who can identify with that,” Affleck told Entertainment Tonight at the time. “It’s an incredibly valuable friendship and it’s very precious and so is my friendship with my brother. I don’t know what I would do without those guys.” 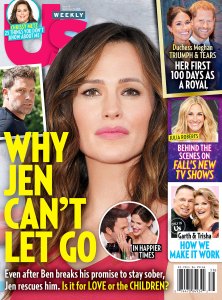 For more on Affleck’s road to recovery — including how Jennifer Garner is coping — pick up the new issue of Us Weekly on newsstands now.