Shawn Mendes and Hailey Baldwin insisted for months that their relationship was purely platonic, but the “Lost in Japan” singer finally admitted that it was a bit more than that.

The Toronto native and the model, 22, were linked from October 2017 until May, when they walked the red carpet together at the 2018 Met Gala in New York City. They always maintained that they were just friends, though. Less than two months after the big fashion event, Baldwin got engaged to Justin Bieber. She unfollowed Mendes on Instagram soon after.

“I texted Hailey, ‘Congratulations,’ and I really am happy for them,” Mendes told the magazine about the couple, who went on to secretly wed at a courthouse in September. “She’s still one of the f–king coolest people ever — she’s not just a beautiful person visually, but she’s one of the most beautiful hearts I’ve ever met. … You can’t control your heart.”

The “Stitches” crooner’s love life has been in the spotlight for years, and he acknowledged that rumors about his sexuality have caused him a lot of stress.

“In the back of my heart, I feel like I need to go be seen with someone — like a girl — in public, to prove to people that I’m not gay,” he told Rolling Stone. “Even though in my heart I know that it’s not a bad thing. There’s still a piece of me that thinks that. And I hate that side of me.”

Mendes explained that up until recently, he often found himself watching his own interviews and analyzing his voice and body language because of the rumors.

“I thought, ‘You f–king guys are so lucky I’m not actually gay and terrified of coming out,’” he said. “That’s something that kills people. That’s how sensitive it is. Do you like the songs? Do you like me? Who cares if I’m gay?” 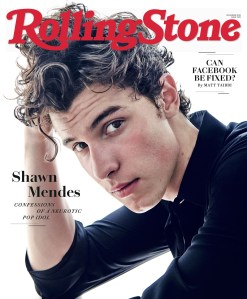