TV
Adele to Host 'SNL' in 1st Public Appearance Since Weight Loss
The queen returns! Adele will return to the Saturday Night Live stage — as the host! — on the October 24 episode for her first public appearance in more than three years. The “Hello” singer, 32, announced the news via Instagram on Sunday, October 18, revealing that H.E.R. will be the musical guest. “Bloooooody hellllll […]

TV
Kim Kardashian Cries While Detailing Robbery, More Letterman Revelations
Baring it all. Kim Kardashian broke down in tears while recalling her 2016 Paris robbery on My Next Guest Needs No Introduction With David Letterman — and revealed a few more startling revelations. The Keeping Up With the Kardashians star, 39, sat down with host David Letterman on the Netflix series, which is set to […]

TV
'Home Improvement' Cast: Where Are They Now?
Does everybody know what time it is? That was the famous phrase that came out of Home Improvement, the ABC sitcom that aired from September 1991 to May 1999. The 30-minute comedy followed Tim “The Toolman” Taylor (Tim Allen) as he hosted a home-improvement show titled “Tool Time,” even though he’s not at all a […]

Kardashians
Everything the Kardashians Have Said About ‘KUWTK’ Coming to an End
A tough goodbye. September 8 will forever mark the beginning of the end of Keeping Up With the Kardashians’ more than a decade-long run on E!. Kim Kardashian broke the news that KUWTK will wrap up in 2021 after season 20. The KKW Beauty mogul confirmed the news via Instagram by dedicating a heartfelt statement […]

TV
How Old Does Lucas Bravo Think the 'Emily in Paris' Title Character Is?
Quite the discussion! Following the release of Netflix’s Emily in Paris, which follows Lily Collins‘ Emily Parker from the U.S. to Paris for work, the actress raised quite a few eyebrows when she revealed how old she thought her character was. “I don’t believe we’ve ever given her a specific ‘number’ for her age, but […]

TV
Did Kevin Confirm Who He’s Engaged to in First ‘This Is Us’ Trailer?
Rewriting history? Maybe so, but one thing is definitely the same: Fans will need tissues before tuning into season 5 of This Is Us. In the first trailer for the new season, released on Friday, October 16, the Big Three returns — although not in the same room together, as they all try to grapple […]

LOL
Faux Pas! Lily Collins Was ‘Wrong’ About ‘Emily in Paris’ Character’s Age
Emily in Paris fans can rest a little easier tonight! Lily Collins owned up to her mistake after she incorrectly guessed that her character in the Netflix series, Emily Cooper, is in her early 20s. “Emily looking at me when I get her age wrong,” the actress, 31, captioned a GIF of her alter-ego via her […]

TV
‘Charmed’ Behind-the-Scenes Drama Over the Years: A Timeline
The power of three will set us free … from everything but drama. Charmed, which premiered on The WB in 1998, made headlines from the start as Aaron Spelling hired Shannen Doherty to play one of the three Halliwell sisters, four years after she was infamously let go from Spelling Television’s Beverly Hills, 90210. “[Aaron] […]

Exclusive
Big Brother's Memphis Reveals What He Learned From Dan
A chess game. That’s how Memphis Garrett wanted to play Big Brother: All-Stars before becoming the latest evictee on Thursday, October 15, in a blindside vote. The 37-year-old restaurateur was evicted 2-0 with his longtime allies Cody Calafiore and Enzo Palumbo – who called themselves The Wise Guys – voting him out over Christmas Abbott. […]

Music
Pass the Mic’s DJ Cassidy Shares His Throwback Playlist
When it comes to music, the ‘80s and ’90s had it all — from bubblegum pop songs to boy band ballads to R&B hits. Now, you can relive the beloved decades with some of DJ Cassidy’s favorite hits. With no end in sight to the coronavirus pandemic, Cassidy — who famously mixed records at Beyoncé […]

Exclusive
Jonathan Bennett Reveals What Was ‘Awkward’ About ‘Mean Girls’ Reunion
He doesn’t even go here! Jonathan Bennett opened up about what was totally fetch about the virtual Mean Girls reunion earlier this month and which moments were uncomfortable. “It’s awkward over Zoom. Right?” Bennett, 39, exclusively told Us Weekly on Thursday, October 15, while promoting his partnership with Piñata alongside Ryan Lochte. “Like, it’s awkward […]

Music
Max Ehrich Releases Song About Ex-Fiancee Demi Lovato After Split
Musical healing. Max Ehrich released a new song about his ex-fiancée, Demi Lovato, on Friday, October 16, following their split last month. “Afraid,” which is available on all streaming platforms, includes the lyrics: “I’m afraid to give up my heart / I’m afraid to lose against love / I’m afraid, afraid to be broken apart […]

TV Recap
Kendall Jenner Has Heated Call With ‘Rude’ Corey Gamble About Kylie Fight
Not over it? Kendall Jenner had an ugly confrontation with mom Kris Jenner’s boyfriend, Corey Gamble, over his role in her blowout fight with Kylie Jenner. As Kris, 64, and Corey, 39, geared up for their Karina Smirnoff dance class on the Thursday, October 15, episode, of Keeping Up With the Kardashians, he received a phone […]

TV
Wait What?! Lily Collins Just Revealed Her 'Emily in Paris' Character's Age
Reading between the lines! Lily Collins just clarified a major detail about her character in Netflix’s hit show Emily in Paris — but some fans think it’s too good to be true. Collins, 31, plays social media maven Emily Cooper in the Darren Star series, which debuted on the streaming giant earlier this month. Since […]

Reality TV
'90 Day Fiance' Original Couples: Who Is Still Together?
Looking for lasting love. 90 Day Fiancé has been captivating audiences since its premiere in 2014 — and has more success stories than viewers might think. The TLC reality series, whose seventh season aired in early 2020, follows hopeful couples who have applied for or received their K-1 visas and must get married within 90 […]

Exclusive
Bethenny Frankel Is Glad Dorinda Medley ‘Owned’ Being Fired From ‘RHONY’
A Big Apple bond! When Bravo fired Dorinda Medley from The Real Housewives of New York City earlier this year, she immediately turned to another veteran, Bethenny Frankel, for advice. “We have become even closer. I really did help her through that entire journey,” Frankel, 49, exclusively told Us Weekly on Thursday, October 15, while […] 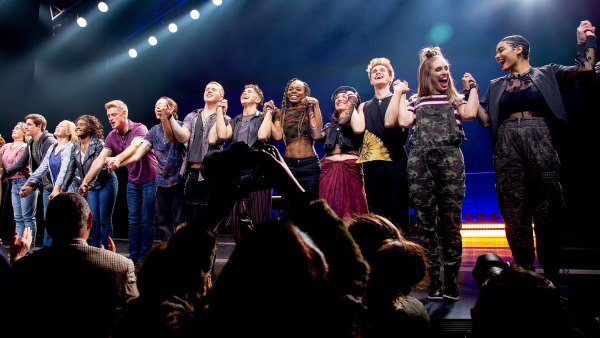 Award Shows
Tony Awards 2020 Nominations: See the Full List
Not letting COVID-19 stop them! Although Broadway is still closed due to the pandemic, the Tony Awards still revealed their nominees for the 2020 ceremony on Thursday, October 15. James Monroe Iglehart — best known for his roles in Aladdin and Hamilton — shared the nominations on Thursday via YouTube. Jagged Little Pill led the […]

TV
Skeet Ulrich Says Goodbye to 'Riverdale' on Final Day of Filming
The end of one chapter. Skeet Ulrich filmed his final day of Riverdale on Thursday, October 15, and officially said goodbye to the CW drama. “Goodbye Riverdale…thank you for introducing me to some lifelong friendships and so many beautiful souls. Today is my last day on set but the experience will never leave my heart,” […]
Previous Next