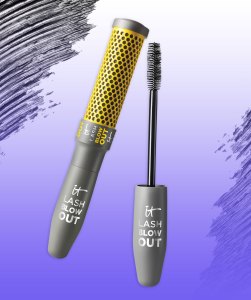 The collaboration you didn’t know you needed is officially here and we’re obsessed.

It Cosmetics teamed up with DryBar for a brand-new type of volumizing mascara — Lash Blowout.

To celebrate the exciting launch Stylish got to speak with the two female founders — Jamie Kern Lima and Alli Webb — to discuss what makes this product different and the importance of female empowerment.

“We wanted to have a mascara that was full-out volume,” Lima told Us. “And figure out a way that, like a blowout, you can get that volume and that lift.” This means less clumping to open up the eyes without sacrificing any fullness.

So how did the brand do it? By focusing on the brush. 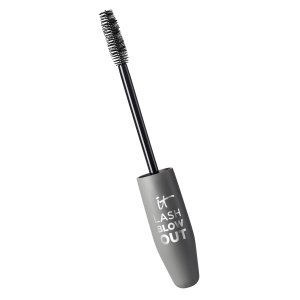 The first thing added was micro-balls to the ends of bristles. These help to pull apart individual hairs to ensure they separate from one another, which makes lashes more inclined to lift and open up.

Another brush-specific detail is the variety of bristle lengths. As Kern notes, lashes grow and fall out on a three-month cycle, which means the individual hairs are at different stages of this life cycle at all times. With different bristle lengths, the formula can catch and be evenly applied to every hair no matter where they are in their life span. “It makes it look like you have more lashes,” Kern said.

As incredible as the product is, the collab isn’t just about the mascara. One of the coolest things for them was partnering up with another successful female entrepreneur.

“I love the idea, even more than a product, two female founders collaborating and not competing,” Lima said. “It’s bigger than the product to me.”

This idea of empowering other women is an important topic that both women actively work to promote.

“For me when we were growing up as kids we didn’t have a lot of female-founded companies,” Webb explained. “I think that just by what we do, and especially working on something like this, we’re coming together in our different fields and it is inspiring for other girls.”

Webb had her fair share of hurdles to getting to taken seriously in the beginning — she never graduated college or went to business school, as she was a hairdresser by trade. “It’s like ‘well if she did it I can do it’ type of a thing,” she said. “Just the fact that we’re out there doing things like this and promoting the fact that we’re female-run companies, it just lifts women up.”

For Lima it’s about owning her success and not shying away from it, especially being one of Forbes’ Richest Self-Made Women.

“I feel like girls are raised to be people pleasers and also have this weird scarcity thing where they’re all competing,” she said. “This messed up scarcity mindset that is contagious.” So what’s her solution? “Just showing it not dimming our light and celebrating other women’s victories, I think that’s huge.”