Still on her side. Justin Bieber addressed claims on Tuesday, March 26, that he married Hailey Baldwin just to spite ex-girlfriend Selena Gomez — and opened up about his thoughts on the Wizards of Waverly Place alum now.

Justin Bieber and Selena Gomez: A Timeline of Their On-Off Relationship

The “Sorry” crooner, 25, posted a screenshot from a troll and shared his epic response, hitting on his relationship with Baldwin, 22, and his feelings for Gomez, 26. “Why would I dedicate my whole life to someone in marriage to get back at my ex,” Bieber began his lengthy message to the person he called “mean spirited” and “immature.”

“I absolutely loved and love Selena she will always hold a place in my heart,” the Canada-born singer wrote with a nod to his on-again, off-again ex. “But I am head over heals (sic) in love with my wife and she is absolutely the BEST THING that has ever happened to me period.” 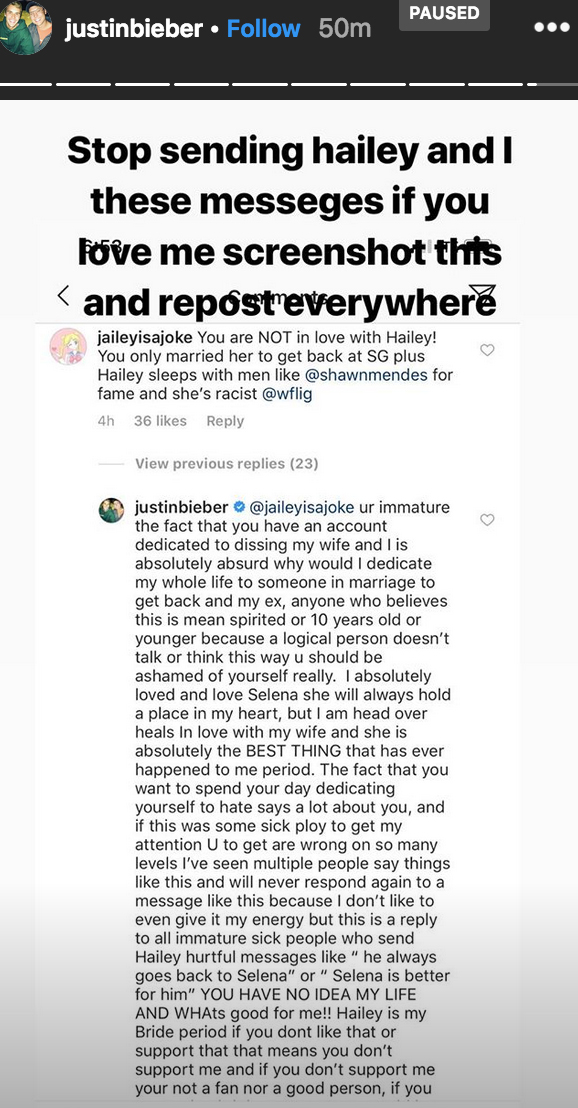 A Timeline of Justin Bieber and Hailey Baldwin’s Relationship

Bieber went on to note that he’s received “multiple” messages like this, and “will never respond again” before coming to the defense of the Drop the Mic host, whom he wed in September 2018.

“This is a reply to all immature sick people who send Hailey hurtful messages like ‘ he always goes back to Selena’ or ‘Selena is better for him’ … Hailey is my Bride period if you don’t like that or support that that means you don’t support me,” he wrote.

Bieber concluded the response: “If you were raised right your parents would have said if you don’t have something nice to say don’t say anything.”

The “Love Yourself” singer’s message comes less than 24 hours after he revealed in an emotional Instagram post that he wasn’t planning on going on tour again. Bieber explained to his followers that he needs to focus on sustaining his “marriage” and becoming “the father I want to be.” (A source told Us Weekly in January that the model “can’t wait to be a mom” and the couple “are excited about the next chapter of their lives together.”)

Earlier this month, an insider told Us that “Justin has stayed away from Selena to be loyal to Hailey,” noting that Bieber and the “Wolves” songstress “haven’t talked recently.”

Bieber and the Disney Channel alum were first linked in 2011, and had a high-profile on-off relationship. The former couple briefly attempted to rekindle their romance one last time in November 2017, but ultimately called it quits in March 2018, weeks before Bieber and Baldwin started hooking up for a second time. (The now husband and wife previously dated from 2015 to 2016.)