Feeling the pressure. Felicity Huffman is dealing with the fallout from her alleged involvement in a nationwide college admissions scheme.

“The shame and humiliation are unfathomable,” a source close to the Desperate Housewives alum reveals in the new issue of Us Weekly. “Getting arrested is the last thing she ever imagined.”

Huffman, 56, was arrested at gunpoint on March 12 for allegedly making “a purported charitable contribution of $15,000 … to participate in the college entrance exam cheating scheme on behalf of” her 18-year-old daughter, Sophia. The actress allegedly “made arrangements to pursue the scheme for a second time” for daughter Georgia, 17, but decided to forego the notion.

The Emmy winner’s scandal has caused trouble in her marriage to William H. Macy, with whom she shares her two children. “Felicity and Bill have been arguing,” an insider told Us. “The biggest concern is Felicity’s criminal case and how this is impacting their daughter.” Additionally, the source insisted that Sophia “had no knowledge of the actions taken in regards to the improvement in her SAT test score.”

Macy, 69, has not been indicted in the scheme. However, court documents claimed that the actor was present for a consultation regarding the plan.

Felicity Huffman, William H. Macy: A Timeline of Their Relationship

According to a source, the Shameless star “is heartbroken” and has “been in tears” over the allegations. Huffman, for her part, has not “fully grasped the extent of [her] alleged crimes or the possibility of prison time.”

Lori Loughlin and her husband, Mossimo Giannulli, were also arrested in connection to the scheme. The 54-year-old Full House alum “truly believed her heart was in the right place,” a source revealed to Us: “Lori is a really great mom who is completely into her kids and family life. She lives and breathes for her husband and children. … Her intentions were pure.” 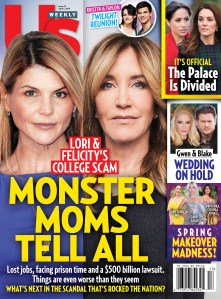 For more details on the scandal, watch the video above and pick up the new issue of Us Weekly, on newsstands now.